No nonsense from Keane 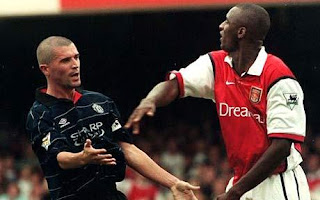 I hated Roy Keane as a player for Manure. He was Fergie's personification on the pitch, the pitbull belonging to the red faced dementor. That said, the Arsenal v ManUre games of that era were about the best footballing entertainment you are ever likely to see. And at least part of the reason why is that Arsenal had the players to out-play and out-muscle Manure on regular occassions.

People like Vieira seemed to relish the confrontation with Keane and his fellow arseholes. Keown would don his extra spiky boots in preparation for the trampling that Van Nistleroy would get, Lauren would axe whoever came near him. Even the "nice" players like Bergkamp and Pires had a nasty streak. And we always had St Grimandi ready to lose a limb if required. It was 50% skill and 50% cage fighting and all of it was excellent football.

I have said many times before that the current Arsenal team is simply not up to the physical challenge that winning the Premiership demands. Its not just about the height of the team, although having a team of midgets is obviously not going to help. Its the attitude to fight and win. To take the knocks on the head and grin back through the pain. Keown loved it and it affected the strikers he played against in every game. Its difficult to say that anyone in the current team is tough like that. Even Kolo and Sagna, who have the potential to be a bit tasty, are a bit polite about it all and Adebayor has clearly joined the peace corps this season.

So I wasn't that surprised that Keane's Sunderland team didn't let us play our fancy, one-touch, no-goals style of football. Thing is, we didn't even make it uncomfortable for Sunderland, who despite what AW says, did not play particularly defensive or physical football. They were well organised and up for it, and as we have seen many times this season, that is all you need to do to get points off us.

So when Keane said this about the current Arsenal team, I thinks its time to take stock and listen:

Roy Keane is absolutely right. Those names were the leaders on the pitch that spurred everyone else on, and led by example on countless occassions. Gallas does not even come close.
Posted by Ted at 10:17

look at the likes of manu and chelsea and they are full of big strong fighters, we are not

The only one I see in the current squad who has a little of those qualities is Cesc. When he is not passing the ball to create scoring chances, he is sliding in for some biting tackles. But again, he is a small guy so he just doesn't have that intimidation factor.

I don't think there is a gooner in the whole world who would disagree. If they did, they would be cunts.