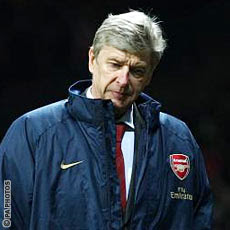 Arsene had this to say yesterday about the support the team is currently getting from the fans and the press:

“When you have such a young team, you have to be intelligent,” he said. “Instead of showing resentment, we have to believe in our team. The structure of our team is fantastic, but very young.
“That means that tomorrow will be better than yesterday. But the younger you are, the more you need support. I am personally very proud. At the moment I do not feel that either from the media or our supporters this team gets the support it deserves."
My immediate reaction is that AW is absolutely correct. At the moment Adebayor, Eboue, Denilson and Gallas are regularly derived from the stands. Walcott is a hero or a villain in equal measures. The chanting has even died down for our genuine world class talents like RVP and Cesc.
Having scored 5 goals in Istanbul, the papers hailed the scoreline as a great success - most fans of other teams were genuinely impressed with what Arsenal had done. Chelsea and Liverpool have both lost in Turkey in recent years. Arsenal destroyed them in their own back yard.
I was amazed reading round the blogs after the Fenerbahce game. Whilst some Arsenal fans were quietly pleased, others were near hysteria at how bad our defence was and were furiously pointing at the faults in the performance and bemoaning, yet again, AW's policies at the club. Ignoring the zealots, most Gooners seem depressed at the moment and deeply pessmistic about our chances this season.
I don't know whether AW proclaimations are correct that this team will deliver success. It seems to me that most people's depression has been caused by the steady stream of departures in recent years of good experienced players, who have mostly been replaced by untried kids. Bags of talent for the future but perhaps a little unreliable in the short term. I posted after the first game of the season that this current Arsenal team was not good enough to win the league this year. I still stick to that view, but unless us Gooners shake ourselves out of this gloom and get back to supporting the team with noise and passion, then I have a bad feeling we will simply encourage the failure that we all feared.
What I'm saying, I guess, is that we have to accept that we are not the best team in the league anymore and that we are unlikely to win a major trophy this year. But so what. We have some great young players and we might do something. Who knows? It might just happen. Hull are third in the table. Liverpool barely ever deserve the trophies they win. Manure were lucky in the league last year and won the Champs league on penalties, but hearing the monstrous arrogance of Ronaldo, you would have thought otherwise.
We need a bit of that around the place again. Cesc Fabregas is the best player in the world. Ever. There you go. Its working already.
Unless we get excited as fans and support the team, then we can virtually guarantee it won't happen. I guess its your choice if you want to come to the Emirates, shout abuse at Adebayor and be a miserable smelly bastard. I just wish people wouldn't bother.
Posted by Ted at 09:41

nice blog and apt points; that arsenal fans are hardly supporters of their club can be seen from the le-gr@ve blog -- just read up the daily blog/comments there :O.

One concern @ blogger : your blog attracts far less traffic than other arsenal blogs and I hardly find any anti arsenal jibes in your blog.I regularly check urs, holic,arseblog and the young guns for the daily dose of arsenal related news/opinions.

I accept the blame, I am a lazy c*nt.

Any advice as to improving our traffic would not be spurned, however we are very happy keeping our blog small and keeping the rif raf away!

I think Obsinho has gone to rant on the Grove and K-Man is still glued to his George Michael and Johan Djourou websites.