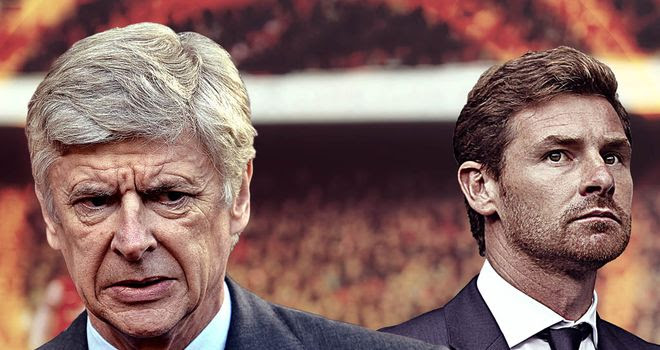 Sadly this was just what many of us feared.  We were not outplayed, far from it, we controlled long periods of the game and dominated possession for the most part, the problem was that we didn't quite have enough cutting edge going forward to turn this into goals, and Tottenham, like many sides in the last few seasons, realised they could kill us on the break, our defensive vulnerability to the counter attack has been an obvious Achilles heel of ours for several years now.

Our midfield were generally excellent, Ramsey having a particularly outstanding game, Spurs couldn't keep hold of the ball for long, the mediocrity of Parker was obvious.  The problem was Tottenham just defended so much better than us and we couldn't make out midfield superiority pay enough.  Our defensive naivety was summed up by the terrible defending for the two Spurs goals just before the half time break, there was no cohesiveness, the unit was all over the shop, Bale and Lennon respectively both had acres and this was when the game was lost.

The pushing up of the centre backs was particularly suicidal and to blame for both goals, Vermaelen was also caught ball watching pretty badly for the second.  The only mitigation was that the first could easily have been called offside.  The problem was our offside trap was too aggressive, it meant we ignored runners and when it was sprung, we were totally sunk.  Really we should have focused more on the men running through, we have good defenders, and gambling like this with the offside trap is surely suicidal?

The goal from Theo's free kick early in the second half was almost the catalyst, we came very close to equalising on several occasions, Lloris did very well to claim an excellent Jenkinson centre, the excellent Ramsey shot just wide late on.  Spurs also could and arguably should have made the game safe on the break, we were very open at times, Bale missed a sitter, as did Sigurdsson.  I also don't think our substitutions worked that well, we could have done with some more pace in attack, the problem is our squad is short in this regard.  Even still, we showed character, kept pushing a did create a few decent chances late on, Podolski's deflected shot could have gone anywhere near the end.

Overall I think we have just become a tad predictable, both defensively and offensively.  We are too vulnerable to counter attacks, we need to wise up to this fast, and we are not the counter attacking force that we used to be.  I honestly feel we have the better players than Spurs, Bale and Lennon were excellent though, we could do with this kind of pace on both attacking flanks, but in many other areas we are significantly stronger, central midfield for example.  We now have it all to do, Chelsea and Tottenham are catchable but it will take a very good run to claw back the deficit.
Posted by 1979gooner at 19:26 6 comments: