Negativity of a nasty minority is not helping

Firstly as I know some rather small minded individuals will be reading this and looking for another needless fight, I shall explain myself clearly and simply.  Yesterday saw us win a game of football against an Aston Villa side that were on a fairly reasonable run of form.  I know it was far from perfect, and yes, several of our recurrent problems, most notably our defensively susceptibility to the counter attack, were obvious.  However the side did show a lot of character, they rallied when it would have been far easier to let their heads drop, they fought back to get a vital win and the three points which keep us well in the race for the Champions League spots.

Some seem to think that games against Villa should be 'big games', the breathtaking arrogance shown by this kind of Arsenal supporter is demonstrative of a quite remarkable hypocrisy, as this brand of Arsenal fan is often quick to accuse our own players of complacency, their complacency is assuming that not every league game is a big important three points for the taking is so deeply hypocritical.  It is also this breed who never gives any credit to the opposition, any game not won in style is always to be blamed on someone from our own camp, it is the blame game, never show humility and never show any respect for the opposition.

Villa did well, their tactics were spot on, and although one can make a very strong argument that we should have been far wiser in our dealing with their swift counter attacks, credit must go to them, they also defended well for the most part.  Lambert does appear to be building a good young side and it will take him time, if they can stay up then they will only grow, the problem for them is that it is very much touch and go as to whether they will stay up, their lack of an ability to hold on to leads has cost them so many points in recent weeks.

I think Arsene needs to wake up and realise that the way we have played 4-3-3 is defensively extremely naive.  My personal view is that we do not have the correct players to play 4-3-3 adequately, and that Arsene has used it because it allows him to play numerous attacking central players.  The problem is that this has meant our side has frequently lacked defensive balance and often attacking width.  We were simply leaving ourselves outnumbered at the back on too many occasions yesterday, defenders were bombing forward and the gaps were not being plugged, so Villa often countered with a numerical advantage and this had to tell at some point, it has been a recurrent problem at the Emirates for many months now.

Whatever the manager's failings and whatever the inadequacies of certain players, it certainly does the team absolutely no good to get on their backs, everyone would benefit from the support of all the fans for all of our matches.  Unfortunately this isn't happening and a negative minority of our own support are really harming our chances.  Players like Gervinho may not be good enough, but do people honestly think it helps anyone other than our opposition to boo and barrack these individuals?  It is so so depressing and so so counter-productive.  I wonder how many of Bergkamp/Pires/Anelka/Wiltord/Henry/Toure would have been booed by this current crop of spoilt supporters, it is worth remembering how many of our greats took a long time to find their feet and benefited from the patience of our 'supporters'.

One player that it is absolutely vital the supporters get behind is the goalkeeper, especially when this goalkeeper is young and relatively inexperienced.  Some would do well to remember that Wojciech Szczesny has only player just over 70 first team games, and overall he has done a damn fine job for one so young.  He is the best young keeper out there for me, of course he has made errors, even the best experienced keepers will do this and every keeper goes through a bad run of form.  His error against Blackburn was poor, however he was not to blame for Munich's second goal, and yesterday he was given far too much criticism for Villa's goal, it was a belting low shot from Weimann, maybe he could have saved it, but it was certainly not a howler.  Our young keeper needs our support not the fickle criticism that he is getting from some of our 'support'.

So there you have it, I am sorry if I am short circuiting some of your 'Wenger Out' brains by criticising the manager and also urging you all to support all of our players all of the time, but frankly I am fed up to the back teeth with the fickle arrogance that some of our spoilt supporters are showing.  It is not big, it is not clever and most importantly is is not helping the club, in fact the only people it is helping is Tottenham and Chelsea in battling us for the CL spots.  So grow up, support the players when they are on the pitch and stop moaning like spoilt babies.  I have no problem with criticism of the manager, players and the board, but is must be done with respect, and at the right time and in the right place.  Abusing our own during home games is simply not on.
Posted by 1979gooner at 13:47 15 comments: 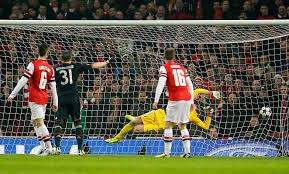 In all honesty I am absolutely fed up with the attitude of many journalists and some of our own support.  It is irrelevant how badly one judges we are doing, even if we were near the relegation zone, it would never excuse some of the pathetic vitriol that is being dished in the manager's direction.  Bayern are a great club and gave us a lesson, let's give them credit, and let's stop acting like spoilt toddlers, if one can never appreciate what's in one's glass, then one becomes a  fucking miserable pathetic bitter individual and that's not nice.  Football is a sport, Arsene is a good human being and let's just show a little bit more respect for each other.  Let's support the players on the pitch and treat our greatest ever manager with a bit more respect.
Posted by 1979gooner at 19:24 7 comments: