A clean sheet but no cigarette 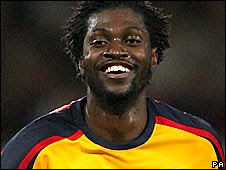 There might not have been five goals banged in today but I though the performance was far more convincing, Upton park is always a tricky fixture and to come away with the full complement of points is a cracking result. The starting line up had me fairly content, Song was back in his strongest position and Nic Bendtner was given a start ahead of the rested Adebayor.

We created far more than West Ham in both halves and the pressure took it's toll in the end, again we must be very grateful for the mighty Manuel Almunia who pulled off an excellent and important save from Craig 'Scrutney' Bellamy when clean through on goal, to be fair to West Ham it was a lovely well crafted move and our defence could not have done much about it. Theo was dangerous when he got on the ball and tested Green twice in the first half, while Green also had to save well from Bendtner's low drive after the Dane had created the chance for himself.

The second half saw more of the same domination, however West Ham created virtually nothing, their pathetic appeals for handball every time the ball hit anything that wasn't a foot summed up just how desperate they were. RVP seemed to come to life as the game wore on, and he forced yet another excellent Green save with a vicious low rasper. Walcott put a very threatening ball across the box while Bendtner made a nuisance of himself down the inside left channel. Despite our domination time was running out and Arsene chose to replace Nasri and Walcott with Adebayor and Diaby.

It didn't take long for Adebayor to have an impact, RVP cut inside again and fed him, he dribbled away from two men and hit a dangerous cross shot across the face of the goal which Flaubert turned into his own net, 1-0 and thank God for that. West Ham never looked like scoring and having broken up another West Ham attack, Bendtner found himself isolated in almost the left back position, he got his head up and hit a simply majestic ball through through for Ade, who then took it past Green and slotted home when it would have been very easy to miss. Two nil it stayed, although Carlton Cole had time to see red for a reckless lunge on poor Alex Song.

Some of our squad deserve a bit of praise after this hard fought victory, especially a few who of those who have taken a lot of criticism recently (some fair some not). 'Comrade' Eboue was outstanding at right back, while Gallas and Silvestre looked strong in the centre, Alex Song was tidy in the midfield and mopped up the danger well. Song's presence in front of the back four undoubtedly helped us, while Silvestre's left foot gives us a certain balance at the back that we lack with Toure and Gallas together.
Phil Dowd was absolutely awful throughout though, there was hardly a bad tackle in the game until Flaubert and Cole lost it late on. All out three bookings were very soft, Song, Clichy and Fabregas can all count themselves extremely unlucky to have gone in the book. One thing Dowd did well was laughing away West Ham's pathetic penalty appeals, the most amusing was one that smacked our player full in the buttock, yet still West Ham lifted their hands in the air to appeal, oh dear.

Bring on the spuds and their dodgy wheeler dealer manager, come on you Gunners.
Posted by 1979gooner at 18:47

A good performance against the Hammers I thought.

Ade showed what a good player he is. A real impact off the bench.

Plus it all came out nicely over the weekend. Chelsea's bubble is nicely burst, ManUre dropped points and the Scouse have already decided to award themselves the trophy in October.

I am going to be extremely pleased when we beat Spurs 3-0 on Wednesday.

P.s. another decent performance by sylvestre I thought.

I would quite like to see him and Toure together.