Getting behind the lads 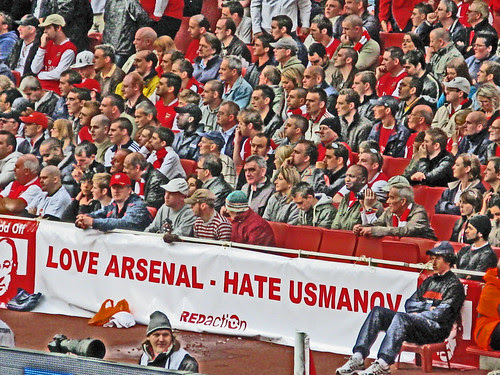 At the recent Hull game I was obviously not happy to see three points going down the bog, however my enjoyment of the game was certainly reduced by a rather annoying minority of fans who seemed to be rather keen to get on the back of certain Arsenal players rather than supporting the team. Goodplaya spoke of his similar feelings at the Porto game:

"The team were not helped by a significant minority of the crowd who seemed to almost revel in groaning audibly at every stray pass and mistake. If they sung half as loud, the Emirates would be a far better place."
Firstly I don't expect people not to groan when silly careless mistakes are made, however it is the fact that some people seem to revel in this whinging that is so nauseating. As Goodplaya says if some of this negativity could be tapped and turned into support for the team, then the Emirates would indeed be a far better place, and the team might do a bit better with that extra support.

We have had a fair amount of success over recent years and the lovely football that we have the privilege of watching is pretty hard to find elsewhere, if not impossible. I know some of our players have their weaknesses, as does our manager, but there are ways of going about expressing this in an adult and productive fashion. I have to say the vast majority of Gooners are not guilty of behaving like spoilt brats, however I am sure many of you have noticed that our increased success has led to an increase in the size of this annoying minority.

There are ways of doing things and this is perfectly demonstrated in the blogosphere by those who can eloquently express their dissatisfaction without resorting to petulant child like rants. Some people would do well to observe the behaviour of certain loyal fans who support lesser premiership sides or teams in much lower leagues, they get behind their sides through thick and thin, and they show that enjoying football is not all about winning.

The human rights act does not empower us to demand footballing success or else, we should not expect success and then whinge if it does not arrive, we should be a little more humble and appreciate what we've got. It may have been acceptable when you were three to have a whinge that you didn't get that Transformer that you so desperately craved, however it doesn't mean you should continue to behave like this as an adult. I'm sure we've all listened to that annoying generic glory supporting Manu fan who loves to ring up the football phone-ins to slag off the players and manager after each dropped point, I just hope our fans can better avoid the trappings of success. Maybe a few defeats is good for the soul, oh how I love to stir up a bit of controversy.
Posted by 1979gooner at 09:59

Sure we appreciate what we've got but we also KNOW what we've got and it isn't a title winner as some clueless bloggers still amazingly claim. And unfortunately we lost the title over the summer, needlessly and quite frankly stupidly. It's hard to get behind a team as complacent as ours, I think some fans put in more effort than our players. We shouldn't miss Flam that much, but we do, A LOT.

what's done or hasn't been done over the summer is in the past,

the point I was trying to make is that this niggling attitude of a minority of fans at games is both bad for the team and wrecks the game for the majority of supporters,

personally I don't want some brainless twat shouting abuse at Eboue for ninety minutes because he's a convenient scapegoat, he may not be a great player, but abusing him is doing no one but the opposition a favour,

at the Hull game for example most of the players put the effort in, we simply had no luck and finished like donkeys,

we do have our problems, arguably the biggest being the problems at centre back and our lack of size throughout the side,

but let's get behind the side!

I never shout abuse at games, it's boorish and you're right, negative - doesn't help us. But only half-hearted attempts were made over the summer and it's come back to haunt us and THAT IS FRUSTRATING. I'm behind the team but now all we can hope for is that the wheels don't come off before January?? Even then Wenger may not act. Suggesting we'll be title winners in five years is incredulous.

I agree, it's incredibly frustrating.

It's hard to know how hard Wenger tried to bring people in, maybe a was unlucky or perhaps he didn't look around as he had so much confidence in the squad.

As I've said before, the biggest problem for me is at centre back, maybe Wenger will be proved right, however if not then this needs to be properly sorted next summer.

I don't want to belabour it, because i don't want to go that route but last gasp or last minute stabs in the dark to buy players doesn't leave me feeling confident a thorough effort was made. Anyway, it's not as if the team needs to be transformed but we're moving beyond needing one or two super class players, we need help all along the spine of the team. If tangible improvements are not achieved over last year, questions regarding the youth experiment need to be asked(as in where is it going?). I'm willing to sacrifice another season to see what we've got exactly, but that's nearing the end of my tether.

anonymous- yes, that's a good point, it's very easy to panic buy and waste a lot of money on players who would have done nothing to help us, plus they would probably stifle the youth development,

personally I think this season could simply come down to judgement, not a lack of squad strength-

is Gallas Toure a functional centre back pairing?

maybe the midfield issue is a problem too, but for me the heart of our defense is our current achilles heel

people can see whats wrong with the team yet le boss doesnt can anyone tell me how eboue is STILL playing for us ?? alex song ?? toure and gallas clearly aint working and van persie and greedt cunt aint much of a pairing so yes a lot of fans are UPSET .. looking at eboue constantly giving the ball away makes me foam at the mouth

How much des watchng Cesc give the ball away make you foam at the mouth? Or CLichy?

Eboue has been one of our most important players this season. And Denilson probably. And those two are getting the mosty stick, simply becasue they are playing and not the Alonso and Barry we had hoped for. They're not here, but Eboue and Dennis-Nielson are so let's get behind them.

ANd for God's sake, let it go with Adebayor. He signed his contract, he deserved more, he got more.

Criticise his performances on the pitch, not his monthly wage bill.

Anyway, none of the first 7 games of the season matter anymore.

We are unleashing the Bisch on the unwitting teams of Europe.

Feel the force of the Bitch-slap.

jesus christ what are u taking about saying eboue is our most important player this season ?? are u 4 real ? hey i respect ur opinion but comeon get real eboue is a fucking down symdrone twat