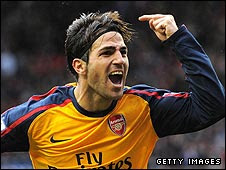 I didn't see today's game, but I did listen on the radio and the annoying biased northern tones to the commentary did have me bashing my head against my walls at times, I should be more tolerant but I can't help my natural rage. By the final whistle I was still ecstatic at the late equaliser, but also angry at the fact that two vital points had been dropped.

The tactics can always be faulted, especially with the advantage of retrospect, however I am inclined to agree in one particular aspect of this critique, that being that Van Persie should either be played up front or not at all, he is simply not effective on the wing. I am not massively fond of 4-5-1, it does have it's place at times, however it is essential that you have pacey wide men who can support the attack, Walcott is perfectly suited for 4-5-1, but RVP simply is not. Personally I would have stuck Nasri on the left if I was forced to go for a 4-5-1, but surely we should have started with our traditional 4-4-2 formation?

Objectively we deserved at least the draw, and probably all three points. It was a veritable bolt out of the blue from a Sunderland side that rarely threatened Manuel's goal. The statistics tell the story, more shots on target, more shots off target, more corners and over 67% possession. Again we were done by a rather speculative long range shot that another day would have sailed into row Z, but today it found the top corner. Even then we could still have easily have won the game.

The ref allowed far too many deliberate fouls, especially in the first half, for example Dwight Yorke seemed to have a license to commit professional foul after professional foul. The key moment in the second half came at 0-0 when a perfectly good Arsenal goal was wrongly disallowed, the linesman adjudged the ball to have gone out when it blatantly had not. Had that been 1-0, the three points may well have been ours, call me paranoid but that's the second week running we've had a perfectly good goal disallowed, I can't see the same happening for any of the other sides in the big four. Of note Manu's first goal against Blackburn involved a blatant barge on the Blackburn goalkeeper by Vidic, the ref ignored this.

So yet again an unfortunate combination of factors has seen us drop points, the very defensive Sunderland side clearly surprised Arsene. I don't think Arsene should be criticised for being too negative, he clearly expected more positivity from Sunderland, however RVP does not perform out wide and should never be deployed their in my opinion. The weak and highly inconsistent refereeing does not help either, far too many cynical fouls are not punished with yellows early on, this doesn't help sides that try to play football, it helps the cynical cheats. I'm erring towards it being a point gained at the moment, but maybe that will change depending on how our other rivals get on, mixed emotions again it seems.
Posted by 1979gooner at 18:05

The ref got it wrong and we should have had three points. We had all the posession etc etc. But we should have wrapped it up a lot earlier. Instead we are hanging on for dear life at the end of the game.
The middle of the park is a real worry. I don't think that Songs' spirited efforts are enough, he just hasn't got enough quality.

I don't think the middle of the park is the biggest worry. Song is decent and will only improve with more games.

The worry I have is the lack of tempo and urgency that we have shown in several games this season, the fulham game especially.

I felt that overrall we did ok, frustrating borne out more from the failure to take all three points. At least we fought back this time. I'm just really surprised that Wenger keeps having a naive opinion that other teams would actually try to be positive when playing them. Hull might have tried it, but most others would not even have the guts to try it.

I've never had a go at Adebayor after his pre-season antics or his slow start to the season.
But yesterday he was woeful.
You see a player like Cesc, the best player in teh team, work his ass off from box to box, and tackle time and time again.
Then you compare that to Adebayor, who upon losing the ball would just wander back never tackle. His first touch was appalling on a number of occasions and his work rate is a shadown of his former self. RvP and Adebayor should have ripped apart that defence but they both played insipidly.
Thank god for Cesc.

I don't think Wenger said anything unfair after the game, it's just the media spun his reasoned words into something they were not.

He simply stated that Sunderland defended with ten men behind the ball, which they did!

He did compliment them on their defensive display.

I am inclined to agree on Adebayor, he was great last season and a lot of it was down to his work rate, he seems to think he's now so gifted that he doesn't have to work hard.

Adebayor could do with being dropped for a game or two to give him a kick up his arse.

I agree that Ade should be dropped for one match. Plus RVP must be deployed as a striker only. He was wasted yesterday and I think he tried in an unfamiliar position.
But come on, the middle of the park is a shadow of its former self. Man, even Flamini wasn't great, (especially not as great as some rose tinted gooners choose to remember him), but compared to Song he was Vieira. Song has a good attitude and I like him too, but as I said before he does not have champions league or premier league champions calibre. He is a middle of the road premier league player.

I rate Song, he may not be a Vieira yet, but given time he can develop into a top premiership player, there aren't many better young holding players around are there?

RVP is familiar with that position, he's played there a lot for the Dutch, however I've never seen him look good in that role.

It's always easy in retrospect, but playing Denilson and Song does not seem sensible, especially with no genuine pace and width on the left.

I completely agree with your RvP comment. 4-5-1 needs wingers, players with pace and good close ball control. RvP is at his best as a striker playing behind the defenders shoulder i.e. with 1 or 2 (max.) to beat.
I think the problem comes with the lack of creative passing aside from Fabregas. Previous seasons we had Hleb who has great close control and passing. So we had somebody else also to put in the killer ball. Since the departure of Hleb, the strikers are not getting as much of a service. Until Nasri settles in we are going to have this problem. Walcott is very direct and Eboue is hardly a Hleb, though he is trying his best. That is the reason this season we see RvP dropping deep and time and again (due to lack of close control) looses the ball. Teams applying the same tactic of 9 or 10 behind the ball more and more. Especially with a goal down, all we are doing is lumping the ball forward or putting in crosses, which doesn't really work that well nowadays. We need another Hleb type player (from within or outside the club), seriously ... Wilshere grow up fast !!