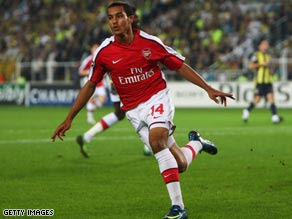 What a game, I have to say that such a conclusive 5-2 victory was quite remarkable given that we played without a central defence for the most part, maybe I'm being a tad harsh on Song and Silvestre, but two Igor Stepanovs would have been about as effective as they were last night. Manuel Almunia's heroics kept the score down, as truthfully without his majestic saves we could well have conceded several more. The ref was pretty poor too, but given the volume who could forgive him for soiling his panties.

It's hard to get across my impression of the game, we were so incisive and breathtaking going forward at times, this was exemplified by the first two goals that were rattled in by Ade and Theo, such crisp clinical work, however the gaping chasms that appeared between our centre backs and full backs were big enough for monster trucks, Guiza cunning movement opening us up time and time again, we really rode out luck at times, but having said that we always looked like we had another goal in the tank.

Almunia was my man of the match, Silvestre and Song only convinced me that they are not the answer to our defensive problems, neither looks commanding and neither filled me with confidence, I really felt that Djourou should have started, he's been one defender that has defended well this season, he's also good in the air and has the potential to command games, if Fenerbahce can do that to Silvestre and Song, then just imagine what a top side could do to them, it would not be pretty. It was not just the fault of the centre backs by any means, the midfield did not do nearly enough to shield them from danger, the days of the granite like Vieira-Petit appear long gone, while Eboue has never been the most defensive minded full back.

Going forward was another story, Fabregas was pulling the strings, Diaby was an unstoppable jinking juggernaut at times, while Walcott and Nasri gave us dynamism down the flanks, and Ade lead the line well on his own. I don't think this Times report is that far wide of the mark, although going away to Fenerbahce in Istanbul is no easy game, remember Chelsea lost their last season, the fact that our defence looked so porous should be a great cause for concern, however scoring five does provide a good reason for cheer. The problem I have with being really positive about a 5-2 win, I know this sounds foolish, is that it will be such a waste if we achieve nothing concrete this year when we are capable of such awesome attacking play. If we are to piss away another season because the gaping flaws at the back are not addressed then it will be a crying shame.
Posted by 1979gooner at 09:00

Only the doomy gloomy Gooners could be depressed at the moment. Scousers would be proclaiming themselves the champions of the world already.

I think we all know that we are not the best team defensively, but I didn't think it was that awful yesterday.

That was a back four that had hardly ever played together. Silvestre won more headers yesterday than Gallas has in a year. Song did fine. Clichy was outstanding and even Eboue looked solid.

Plus, I think it was a tactical decision by AW to play a high line and run the off-side risk. Yes there were some tight decisions on Guiza being offside, but we were only caught out a few times and Almunia was great.

Buts lets forget the defensive fraility. Diaby was great, Walcott was great, Nasri was great, Cesc was great. Ade scored and worked hard (not great but there you go), Denilson was ok but a bit lightweight (no suprises there).

We have said a million times that this team is not big and cannot defend. So, it looks like Wenger is going to solve that problem by just going on the attack.

So I say fuck it. I'm done with being depressed. Kamikaze football is the way forwards.

I didn't want to come across as depressed, it was fantastic stuff as you say.

The spine of our side is just too soft defensively.

It was not as bad as I gloomily pointed out, Guiza is a very good player and Fenerbahce will always create chances at home, however I don't think Silvestre looks that great, not very mobile.

I really think Djourou should be starting at the moment.

I saw a different game. Fenner equalled us in possession, took more shots, and had the top performing striker, as much of a threat to us as Ade had to be on his own last year. Our second-line defense did great under the circumstances where we did not play typical possession football, and were pressing all the time.

Its great that a team without six or seven first teamers plays this well away in this kind of venue, and people can still argue about whether the starting line-up was correct. That, to me, signifies a depth that Liverpool has yet to show. It's a long season.

I think every Gooner watches a different game at the moment. Some people will not have got past the fact that Adebayor and Eboue were playing at all. But they are idiots.

Guiza is a class act. Fenerbahce are a good side, maybe not at their best, but so what. 5 goals is 5 goals.

I agree its a long season and I think we are quite well placed. Not great but there you go.

Also agree about Djourou. Wenger has a difficult time with the centre backs as I don't think he has any clear choices. Even the mighty Kolo Toure is not having a good season.

You can also bet that whatever choice he makes, the doomy Gloomers will say its the wrong one.

We score 5 goals away from home with some key players missing through injuries and all some fans seem to dwell on is the fact that we conceded two goals. Makes me just wonder ....
As far as I,m concerned, we play unbelievably well, Theo, Cesc, Ade, Diaby (what a first half performance), Clichy, and others kept me entertained.

Silvestre wasn't that bad. The fact that this defence had never played together can only encourage us. I think Silvestre might be real find. A few more games under his belt and Gallas is going to find it hard getting back in the side.
Changing the subject I was working all over the wonderful area known as tot*enham today. What a pig's ear, dirt box jury, fuck stick, welk chafing, shit bird, c*nt fudge of a hell hole it is.
Up the Arsenal!