Wenger has killed the World 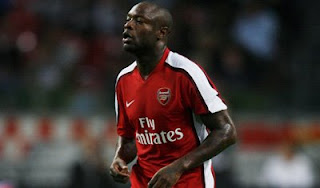 Do you know one thing that makes me more angry than the Aids epidemic in Africa, the plight of the Patagonian toothfish, the collapse of world economics and Darren Anderton? Its the idea that Arsene Wenger is still the f8cking manager of Arsenal football club.
I have been a fan for several years and I used to pay a f8cking fortune to watch Arsenal on Sky. I switched to Setanta when it became free on cable, but I've got rights you know and Arsene has let me down big time. BIG TIME.
Its hard to know where to begin. How can someone still be in charge when they haven't one the league since 2004. In fact, they have not won a thing since 2004. That is four years of hurt - its most of my teenage years. Its a f8cking joke. I only started watching Arsenal because Manure got shite, but now I'm not so sure. I reckon Wenger has lost it, man. Like TOTALLY LOST IT. I just feel betrayed.
Who the f8ck wins anything with kids? Our team is so shite that its painful to watch. I actually bleed from the eyes when forced to watch our f8cking kids play. Its not like Manure have had 15 years of success built on a dynasty of spotting young talent like Giggs, Beckham, the Nevilles, Keane, Butt, Scholes or any of those f8cking great players they bought in about 1993 for peanuts. Its not like Liverpool dominated football for two decades based on a boot room culture where the kids scrubbed the boots of the first team players, until they themselves became the first team players, and so on and so on.
I didn't play football at the highest level, or indeed any level. In fact, I have never played football once in my life, but I know football has changed since the old days. Its different now because of the Champions League and Sky. They didn't have money in the 70's. Then it was just long hair and drugs. Anyway, all old footballers were crap. If they weren't crap, then they would own more than just a couple of crap pubs now.
I can't believe anyone watches Ajax. Their team is so shite. So what if they have one of the greatest heritages for footballing excellence of all time? Chelsea would shite all over them and everyone who watches Ajax is a numpty. Who the f8ck do Ajax think they are charging people to watch that shite?
Its not like Michael Owen was any good when he was 19, or Wayne Rooney, or Lionel Messi, or old people like Pele. You have to be at least 26 to be good as a football. Thats science. Plus, its very simple to see how good a player is. The f8cking papers write about it and say "Bentley is great and Spurs consider £18m offer", so its f8cking easy - you just contact Bentley's people and offer them £19m for him. I just don't understand why Wenger doesn't get it. Who the f8ck had heard of Cesc Fabregas when we got him at 16? How much did Fabregas cost? Wenger is taking inexcusable risks with my team. Its BANG out of order.
Wenger is a proper mug. A PROPER MUG. Adebayor saw him coming big time. So what if Adebayor scored about 30 goals last season? That doesn't make him the last Arsenal player to score 30 in a season since Thierry Henry. Who does Adebayor think he, Thierry Henry? Anyway, Thierry Henry was proper shite when I saw him in the Champions League final. He let me down big time that night. BIG TIME. That was it man, that was the big one, and f8cking Henry f8cking blew it.
Every single player Wenger bought is either shite, young, or shite and young. We will never win anything. Definitely nothing until 2009. Its a f8cking disgrace. Apparently there are massive football fans in places like Newcastle and Hull who have never seen their teams win anything. Literally, nothing in their lifetimes. Like not even the Carling Cup.  Can you f8cking believe that? It must be different up there, because I would like definitely have switched to a better team. Anyway, if Newcastle put some proper money into their team, like at least £20m a year, then they would definitely win something every year. It would guarantee them success. Wenger spends f8ck all. He is an idiot.
If Arsenal don't win it all this year, then I'm off. Chelsea are the future - the collapse of the Russian economy won't hurt them at all. It will be Wenger's loss.
None of the views expressed in this post are those of the author, who has bi-polar disorder, or is drunk, or too clever for you and himself by half.
Posted by Ted at 12:14

bruv ur slew waste!!! AW is da most sucessful manager weve eva had! heez changed da face off football with da way he has made Afc play der football. we have a recognised brand of football which is playin da best football in europe if not the world. so we havent won a trophy in 4 years but that was the result f revamping the whole team n getin them to play football the way it should be played. get a grip n support da boiz, no other teams play football like us so be grateful wer not as boring as liverpool! da trophys will come but to be fair tha club duznt reali need fickle fan like u tryna bring us down...GUNNA4LIFE

sometimes this is just too easy.

Has Gunna4life heard of Sire Chasm?

Good post :) maybe next time photoshop gallas holding up a sign reading "sarcasm". I almost tracked you down to kill you after the first paragraph.

gunna4life is a mug, A PROPER MUG! Who has just been mugged off, by a right bunch of muggy c*nts!

the ajax bit was hilarious :P

Average Satirical piece. Unfortunately, most rabid fans won't get it or past the 3rd line at that.
But your insistence at swear words at every turn was a real low in itself; dragging the article into the cesspool of utter rubbish.

Was that post a joke? Moaning about Henry in the Champs league final? That year we were very average and spurs would have finished above us if we hadt had him.