Character despite the flaws 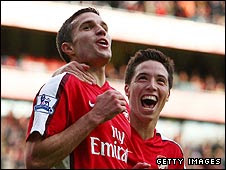 Three points was important, however having glanced around a few other Gooner blogs, there are still some rather significant concerns about certain problems with our squad. It does seem rather pessimistic to concentrate on negatives after a convincing victory, so I shall try to put my concerns in this context, I am not all doom and gloom by any means, however these problems do need addressing and should not be brushed under the carpet.

Everton are a decent side, but to have lost would have been a dismal result, and this is what looked like happening if the first half performance had been repeated in the second half. It was a strage decision to play Alex Song at right back, especially given the fact that Emmanuel Eboue is a right back by trade, and it certainly seemed to help Everton run riot down our right flank in the first half, it also is where the opening goal came from.

The half time switch of Song to centre back and Eboue to right back made a world of difference, along with the introduction of the dynamic cut and thrust of young Theo. Nasri's sharp finish just after the restart was also crucial, without a quick goal the belief may have started to drain from out players, but with it they went from strength to strength. It was also heartening to see Diaby appear for the final few minutes, if he can stay fit it could make a massive difference to us without the obvious weakness in the centre of midfield.

The injuries picked up over the international break were unfortunate, however the decision to play Alex Song at right back is hard to defend, surely Eboue should have started there, and arguably Gavin Hoyte would have been a better bet. Denilson is a very good young player, however he is not able to compliment Cesc, they are fat too similar to each other to form an effective partnership that will dominate games. Having said that we hardly had an abundance of options in this department, with the loss of Flamini and Gilberto in the summer we look rather short in this area. Diaby needs to stay fit as he now has a massive opportunity, if he doesn't grab the bull by the horns then surely Arsene will have to dip into the transfer market to fill this void.

There were some big positive aside from Diaby's return, Nasri's directness and sharpness in front of goal makes such refreshing viewing in comparison the the dawdling Hleb, while Silvestre did ok on his debut and could turn out to be a rather astute purchase. Fortunately Djourou is back for our trip to Turkey, surely it will have to be Djourou and Silvestre in the middle with Eboue and Clichy at full back, the midfield will depend on Diaby and Nasri's fitness, while Bendtner returns to the squad and may be rather close to displacing the misfiring Adebayor. The atmosphere will be intimidating and we will have to sharpen up defensively, a better team than Everton would have punished us more severely for our slackness on Saturday.
Posted by 1979gooner at 13:13

We did fine ni the end.

I am not sure Wenger could justify the starting Xl to anyone to be honest, which raises further questions over whether he has "lost it". Whatever "it" is.

Denilson is a fine player, just not the player we need. And neither is Diaby. We know that, we've seen him play, we don't need to pin our hopes on him being a type of player he isn't. He is attacking, likes to hold the ball, a bit sloppy in the tackle, and suspect in his work-rate defensively.

We all thought Song would be the DM that Wenger would use, but that hasn't happened.

The balance of the team is currently wrong, but there is not much time to correct it before the gruelling November/December fixtures we have come around.

Agreed, none of our players are bad, in fact, they're quite good. It just so happens that the collective mix we've got will never win the epl. The way we are built we have a better chance to win the champs league.