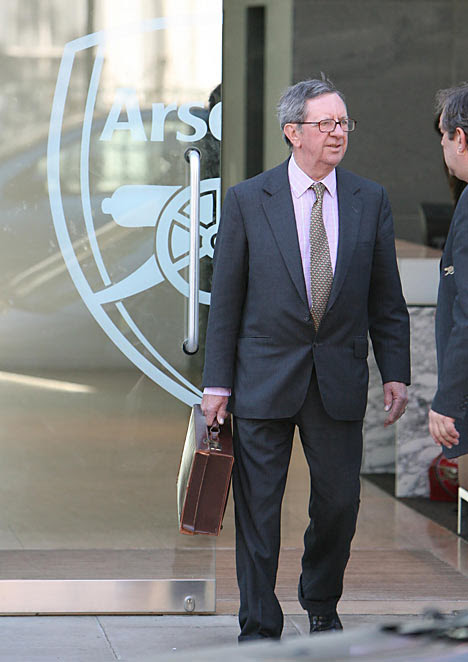 Peter Hill-Wood has given at interview on Arsenal.com, within which there are some rather interesting comments and opinions. When asked about transfers and increased player power he had this to say:

"Well they do and maybe people need to be waking up to the realities of the world and that the days of easy money have come to a pretty sudden end. There is an awful lot of talk about big transfers and major demands of players but you will find throughout the UK and Europe that money is not quite as easy to obtain as it used to be. So I think a lot of these stories emanating from agents may not actually come to fruition. There is a lot of talk and not a lot of action."
Interesting words indeed. Obviously the current financial climate will inevitably have a significant impact on football clubs and consequently players, however the clubs that are run by billionnaires may not be quite as affected as those that are run as viable profitable businesses. There is logic in behaving slightly cautiously when it comes to splashing the cash at the moment, who knows how a major recession would impact upon football clubs. He then reiterated this point:

"Well it disappoints me because a lot of people don’t seem to realise that in the long run you must run a football club on a sensible commercial basis. A lot of the figures bandied around at the moment don’t make commercial sense to us. That is what disappoints me, that people are prepared to do what can be construed as very silly things."
He also talks of the new stadium, our financial postion, the hunt for a new Chief Executive, the lack of recent trophies and he hinted that things may happen in the next couple of weeks on the transfer front.

I am sure that there are many people who will not be happy with Hill-Wood's words, however I'd much rather have this kind of sensible and pragmatic approach to running the club in the long term than a risky strategy that would risk the club's long term future for short term gains.

The transfer fees being banded about at the moment are not in touch with reality, over 40 million for Robinho- a player who has hardly set the world on fire as yet, 20 million for Ronaldinho- an overweight shadow of his former self, 20 to 30 million for Adebayor- one good season and 17 million for Bentley- not even a regular England international as yet.

There is currently no need to panic, although I am sure some will use Hill-Wood's words to jump on the same old tired bandwagon. The transfer merry-go-round has not yet commenced, Hleb and Adebayor remain, once a few moves a made a bit more momentum may be gathered as a result of the availability of funds to the selling clubs. We undoubtedly need one or two more players, but this will depend on who actually leaves, and as we know and Peter Hill-Wood says there are a lot of people out there doing 'silly things'.
Posted by 1979gooner at 14:31

Unfortunately, for the cretins demanding massive signings, his words will splash like the waves of the sea on the rocks of idiocy.....
(attr P Merson, 1988)

Have you heard the Alonso rumours - sound like bull to me, and I really wouldn't want us to sign that dirty cheating slow sack of shite.

Check the squad for the Barnet game on Arsenal.com- I think some of our youngsters are going to surprise a few this year (again).

There are kids like Vela, Denilson, Bendtner, Walcott who are already very experienced.

While there are some amazing talents like Ramsey, Lansbury, Wilshere, Nordtvelt, Traore, Randall, Simpson plus Gibbs/Merida who are away on international duty.

I just think we need to add a couple more experienced internationals to the squad to give it a bit of balance and we'll be looking good.

Worse case scenario of Adebayor staying, assuming Hleb has definitely gone, with no one else coming in, then we look a bit short for a title challenge.

Just found this when deciding whether to get Arsenal TV or not. The stats show that Hleb has bought very little to us in terms of end product. Which we all knew. But the fact he had a shot only every other game, is quite incredible. I'd say Billy Gallas and Kolo have at least 2 a game each.

Also, over his 3 years we have won more and scored more without him. To be honest, couldn't care less that he is gone, and don't think we need a replacement.

The kids could surprise some people. BUt my main concern is also squad depth. We looked light last season, and we have now lost 3 (FLam, Hleb and Bert) players with a lot of experience between them.

We do need something more in the middle of the park. Diaby/Denilson is not going to wash it for me. The thought of them away against Gerrard/Mascheraon/Ballack/Essien/Anderson/Scholes is to be honest a bit embarassing.

I was always delighted when Alonso played against us. Always shit. A real midfield stroller.