More sparkle from the young gunners 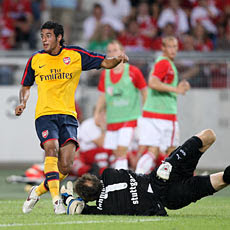 An encouraging amount of character was shown last night as a young Arsenal side overcame their first proper pre season test thus far, defeating Stuttgart 3-1, judging by the look on his face, poor old Jens didn't seem to enjoy letting three is the old onion bag. The Arsenal line up was interesting, with Djorou playing at centre back and the much maligned Eboue in the centre of midfield, while Adebayor and RVP lined up together up front.

I wrote this piece earlier and then noticed that my fellow Gooner Ted had already done an expert match report, here are also plenty of other match reports to read including this one at Arsenal.com and this excellent piece at ArsenalVision, so I won't bore you by repeating things over again. Arseblogger also has an excellent summary of the game and other bits and bobs. RVP was sharp, Adebayor was not, Eboue did better than many expected while Denilson did ok.

Theo looked lively, as did the nicely direct Nasri, Djorou and Gallas did ok, while Sagna and Clichy are the best full backs around. Basturk's opening goal was well taken but the the amount of space he found was slightly concerning. The massive plus was the way in which the powerful Bendtner and the explosive Vela combined for the first two goals, while Wilshere's great goal after Clichy's sterling work was yet more icing on the cake, and Ramsey again looked very tidy.

Although some people are spitting blood because they believe the Bischoff signing to be our last activity on the transfer front, it appears that Arsene may be keen to add one more experienced player to the squad, so I would advice those who enjoy spitting blood to remain calm and conserve their energy. I am also glad that Myles Palmer has seen the light at last, well done Myles, it's always better to face up to these things.

Football is massive business these days and footballing blogs have proliferated over recent years, meaning that some people seem quite desperate to expand their readership. We all know how the media likes to make up stories to sell their papers, and this technique is now rather routine amongst the blogging community.

Personally I think it smacks of desperation and a lack of integrity, however that hasn't stopped some rather well read blogs from stooping to this level, I'll mention no names as I'm sure you know who they are. Luckily I think the vast majority of fans are intelligent enough to realise who the culprits are, however it still doesn't stop a rather vocal minority from continuing to embarrass themselves on a fairly regular basis.
Posted by 1979gooner at 12:54