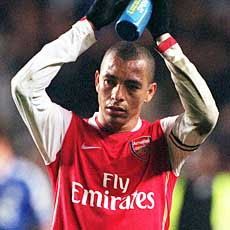 If ever a player deserved a great send off then it was Gilberto Silva, having joined Panathanaikos it is good to see that the club has made a real effort to bid Gilberto well, there are several special features up on Arsenal.com including some video and photos of Gilbertos' best moments as an Arsenal player. It does not need repeating here, but Gilberto has been the model professional, he's always given 100% on the pitch and never complained when not selected, in gaining his lucrative move to Greece he has done everything by the book. Farewell Gilberto, we'll miss your great character and big smile, it's a great shame that there aren't a few more like you around these days.

Quite a contrast to a certain Arsenal player who has just joined Barcelona, he who shall remain nameless didn't take long to start slobbering over his new club's badge, if I were a Barca fan then not only would I be stupid, but I would also be rather repulsed by this slimy behaviour. It looks like Emmanuel Adebayor may well be staying at the club, making for a rather interesting situation given his antics over the summer, can I plug you to read my open letter to Adebayor and email me at 1979gooner@gmail.com to add you name to the list, we're at around fifty names so far.

The players get their first run out against Barnet on Sunday, I can't help but get very unexcited by pre-season friendlies like this one, it seems that the feeling is mutual, at this stage it's really just about building up match fitness and trying to avoid any injuries. Indeed a few of our exciting young players will be involved, however these games tend to lack any flow with large numbers of substitutions and novel team selections not being particularly condusive to creating the most gripping of spectacles. This kind of game may help to remind us that we do have one or two forgotten talents who may yet turn into some top drawer material, for example Denilson. Maybe something will happen on the transfer front, maybe it won't, I still have the gut feeling that there are a few big moves to come.
Posted by 1979gooner at 01:23

Good luck Giblet. Its been a pleasure.

If we sign someone, I really don't want it to be Barry or Alonso. Neither of them fit the Wenger mould of young, skilful players. Both would be transfer records for Arsenal at about £15m and I don't think either one of them is a replacement for Gilberto or Flamini.

For once, I am begging AW to do exactly what he always does. Either sign someone we've never heard of or sign no one.

Signing no one is madness.

Our squad was thin last year, and it is even thinner now. We lacked experience last year, and we have less now. Wenger gambled not buying in January and it backfired, and if he gambles again then no level of excuses or bad refereeing decisions will wash.

I look forward to Diaby becoming a player none of us currently think he can be, or Denilson maturing overnight to be ready to face Gerrard/Essien etc., but I do not hold my breath.

Wenger needs to sign experience and quality. Barry at £18m is a lot, and Alonso is cack, but frankly I'd rather Wenger gambled on spending a bit. His no-spend gambles over the last 3 years, no matter how close they got, have ultimately not paid off