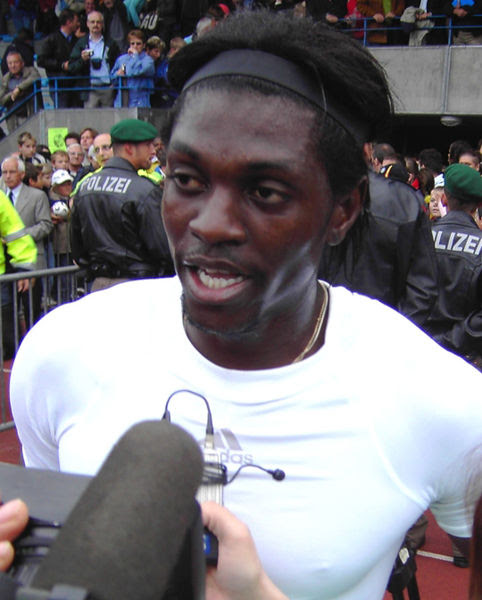 Hleb(that loyal servant) and Gilberto have now gone, Flamini had already departed, while Ramsey and Nasri have signed, and Vela has returned. I am sure I am not alone in thinking that we are a little short in terms of experience and cover, especially in the midfield, one or two slightly more experienced players in this area would surely be of benefit to our hopes of challenging on all fronts. I am sure the club are trying hard behind the scenes to make things happen, but as Peter HW says, this is not the time to be making reckless gambles. However I am sure that this won't stop the same old people harping on with the same old tired complaints.

One thing that I feel we can be justified to be disappointed by is the behaviour of Emmanuel Adebayor. He had a great season last year, even if his performances did fall away towards the end, there also may have been signs of a bit less effort and a bit more egotistical petulance creeping into his game as well in the latter part of the season. His and his agent's behaviour this summer have been embarrassing to the club, football in general and themselves. Players are well paid and should show a little bit more respect towards their contracts, they should not seek pay rises via the media when they have several years left on their current deals, they should show some respect to their employers and behave like adults, not spoilt children.

If Emmanuel Adebayor is still an Arsenal player next season then I would find it impossible to cheer him unless he makes a formal sincere apology to Arsenal fans, the club and his fellow players. Personally I think the best treatment we could give him is complete silence. For this reason I have decided to write an open letter to Emmanuel as below, encouraging him to apologise for his behaviour. If you wish to add your names to the letter then add them below or email me at 1979gooner@gmail.com; then I will send the letter with names attached to Emmanuel if he is still an Arsenal player at the start of the season:

We have been very disappointed by you and your agent's behaviour this summer. We appreciate that you had a good season for us last year, but you are under contract to Arsenal and should respect your contract. If you want a pay rise then you should go about this in the correct manner by speaking to the club and not by leaking quotes and stories to the media.

We are happy to forgive and forget your behaviour on one condition, that condition being that you issue a formal apology to the club, your fellow Arsenal players and the fans for your behaviour this summer. If you do not apologise then I will not jeer or boo you, however I will show my lack of support for your actions by greeting your efforts with silence until an apology is issued,

1979 Gooner.
Any names added below would be very much appreciated or alternatively email the info to me at 1979gooner@gmail.com, and if this letter could be linked up to any other posts then it would also be very kind. I see no point in getting angry about the likes of Adebayor, I feel silence is a more deadly weapon.

ps keep an eye on the top right of the blog for the tally, if we get enough names then it may even be newsworthy
Posted by 1979gooner at 21:09

hey this is good.can u plz tell how i can add my name??

just email me at

Good idea but I don't think he will apologise, then again well worht a try I suppose.

Keep it up the good work!


It was 'Give him the ball and he will score'

Now it is
'Give him no dosh just let him go'

Add me as well please. A very polite letter and well written.

Add my name to the list, please: Val Prasad, USA.

Joey Blake - Add my name please. Totally agree with this.

Please add my name to your letter, I feel it says what needs to be said in a refreshingly grown-up way. Graham Doyle, London.

A notable effort, but I think it might be asking a little much give the player's behavior, and also the position his over-zealous agent has put him in with comments in the media.
I'll add my name to the list when/if Ade shows up in a named squad for the side. It seems very likely that he will be staying at Arsenal this season, but now it looks like he might end up on loan somewhere if we can't sell him outright.
-Joe N.
Colorado, USA.

You get my vote of confidence, mate :)

You've got my support, add my name to the list!!

Great letter, well written and spot on! Could not agree more! I like the fact that rather than just saying ade could never be forgiven like many others do, you gived him a chance to redeem himself.
Add my name please?
Mitchell Cooper

Nice letter. As a great Arsenal Fan I will like u to include my name in this letter of urs. I appreciate it.

My name is LEO AYI

NB: Wenger also need a letter. Hope he can get us a better defensive and Affressive midfielder to push our ball forward.

Charlie George here. It's a poor show seeing your behaviour in the Summer so, be a good chap and fuck off.

Add my name on the list, mate!
Armen
Glendale, CA.

He is a professional footballer, so what do you expect ? As the man said " Go buy a dog".
He wants to get as much money as his agent doesn't nick from him, probably most of it.
Anyway, Arsenal have always been good and big traders. Hope they sell for tons of dosh.
It also demonstrates that these arseholes can ALWAYS be bought AND sold.

Me too, Chris L, Finsbury Park

Oh Grow up you fricking mugs. I'll add my name to the letter when the world changes so much that none of us aspire to take a better paid job if it is offered to us. Its a Dog Eat Dog World, get over it. Just trust in Arsene!

I appologize to everyone!I'm sorry...