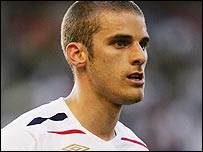 If David Bentley's transfer to the spuds goes through today for £17 million quid then Arsenal can expect to cash in thanks to the sell on clause in the player's contract. It has been rumoured to be 50% of the fee, if this is true then we'll be getting a whopping £8.5 million! One can't help but feel that this is a hell of a lot of money for a player who has not even become an England regular and has hardly been a consistent performer at the highest level as yet. I look forward to calling the rather arrogant and annoying jumped up little shit a c**t next season when he 'plays' for the spuds.

It's very cunning of the club to have secured such lucrative sell on clauses in all the contracts of the young players that we've sold over the years, one recent example of a big dividend payout was following Fabrice Muamba's move to Bolton from Birmingham city. Long may these payouts continue!

Elsewhere Wenger has hinted just how highly he rates young Jack Wilshere, it has also been hinted on Arsenal.com that Diaby is to take 'centre stage' this season- providing a big hint that no more big names will be arriving in the central midfield slot, Fran Merida was named as one of UEFA's future stars following some good work at the U-19 championships, Gilberto has also had some sensible stuff to say on greedy short sighted footballers, while Arseblogger reckons it's the proper pre season from tonight.

William Gallas has also spoken out and apologised for some of his rather poor behaviour as club captain last season, while Gallas has also been backed by Arsene- personally I think he deserves another chance and hopefully if we support him he will repay our faith. Over and out Gooners.
Posted by 1979gooner at 10:49

Labels: arsenal round up cheers spuds

That's it. I can't fucking take it any longer. Can someone please explain to me the following things;

1.) WHy do we seem to have no money, when clubs like SPurs, Liverpool, Newcastle, Portsmouth, Sunderland and even fucking Hull do.
2.) How the bollocks are we going to win anything with a midfield made up of one class player, one kid, 2 sicknotes in Rosicky and Diaby and 1 new lad who I hope will be great?
3.) If this is the signing that Wenger was mentioning as a "body" for the middle of the park, does that mean he has finally lost the plot? Van der Vaart for £7m, Jao Moutinho for c£15m, Veloso for c£15m?

I am crying tears of blood....

Van der Vaart is a slow and very over hyped player that I am glad we are nowhere near.

Barry is not an Arsenal player, again not athletic enough.

Diaby has the ability to do the job, fingers crossed.

I do agree that we are a a tad short on depth in the midfield, if we have a few injuries we shall be shafted.

Up front and at the back we're pretty strong.

Plus don't forget the kids.

1979gooner, you missed a more important point in your reply. None of Spurs, Liverpool, Newcastle, Portsmouth, Sunderland, Hull and whatever else have a brand new swanky stadium to pay for. Our future will more or less be secure soon enough.

Well said 1979! Today is truly a great day for Gooners.

1. Spurs have wasted £17m on the overrated shit-kicker that is David Bentley.
2. A good proportion of that money is coming to us.
3. Spurs have lost Defoe and Keane since December and Berbatov wants to leave as well.
4. We have barrels of money and a manager who is sensible about transfer fees.
5. We have a better youth policy than virtually any other club in the world.