Nasri signs and more to come? 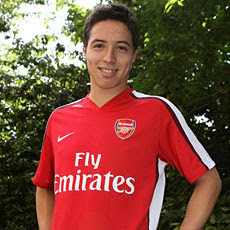 Samir Nasri has officially signed for Arsenal, I don't think it was ever really in doubt but it's nice that the deal has now been concluded. Nasri signing surely means that Alex Hleb is about to depart for Barcelona. One can't help but feel that this is a good bit of business for Arsenal, signing a very talented and hungry French international, while shipping out someone who has been inconsistent and flattered to deceive a lot of the time. Hopefully Nasri can shoot a bit more than our favourite Belarusian.

The situation of Emmanuel Adebayor remains unclear with rumour still persisting around possible moves to Barcelona and AC Milan, one can't help but feel that his behaviour has made his position as an Arsenal player untenable. Possibly moves are being made behind the scenes to secure a direct replacement for the Togoan. Anyways there's not much else interesting to say. Watch this space.
Posted by 1979gooner at 09:19

Thats the same Samir Nasri who made the France Euro2008 squad. Unlike Flamini or Diarra.