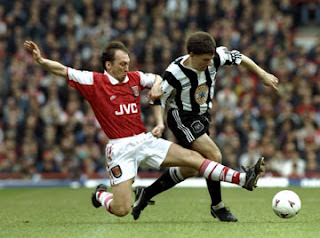 I'm desperately bored of this summer's doom and gloom mongering. Everyone is either shite, or leaving, or shite and leaving. So I thought a little trip down memory lane might give some food for thought.
Apparently, Arsenal spent more money that any other UK club in the summer of 1995, namely £7.5m on Bergkamp and £4.75 on David Platt.
Glory days after the miserable last years of George Graham's era.
Now Bergkamp is undoubtably one of the finest Arsenal players of all time. and was money well spent, not that he necessarily was able to show it in his first season, when the rest of the team was mostly shite.
But Platt is one of my least favourite Arsenal players of all time. I don't exactly know why, but I see very little association between Platt and Arsenal, other than that looping header at Highbury in November 1997 when we beat Manure 3-2. I liked Platt that day, but the rest of the time he was mostly shite. The picture above shows him not tackling Peter Beardsley, who was about 110 at the time.
At the time we signed him, Platt was, I think, the England captain and was generally regarded as an excellent player having enjoyed success in Serie A with Juve and Sampdoria. He was 29 when we signed him, which should mean he was at his peak, although perhaps not with many years left to look forward to at the top level. Still, £4.75m was seen as a good price and a real indicator of Arsenal's "ambition", presumably to waste good money.
In today's perspective, he is exactly the kind of player that most blogs are screaming for us to buy. Not massively expensive, not massively talented and not massively going to do anything for Arsenal whatsoever. Gareth Barry and Xabi Alonso, eat your hearts out.
Arsenal finished 5th in the season 1995/96, scraping to a UEFA Cup spot on the last day of the season. It was perhaps a decent improvement on recent form, but Bruce Rioch got the sack and AW arrived in October 1996 signing some lanky git called Patrick Vieira (who were both unheard of, and chuffing well French at that). The rest, as they say, is history.
Posted by Ted at 09:40