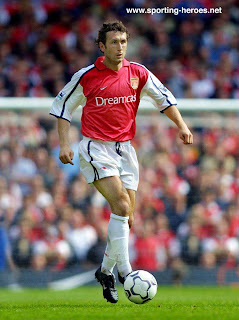 Afternoon all. Arseblog made the point over the weekend that Hleb should have sorted Murty out good and proper, rather than the rather girly slap that got him a deserved 3 match ban. With apologies to 1979 Hleb should have got a red card, deserved his ban for being an idiot, and the fact that the FA are inconsistent doesn't change that. Just ask Aliadiere.
So, here's a short half to one that we did get away with. The legendary Gilles smashing the Argentine Simeone in the face in the Arsenal v Lazio match in 2002. Great stuff from someone who's commitment was far greater than his talent, and we loved him for it. Eboue would be the world's best player ever if we could transplant Gilles' commitment into him.
If Gilles wanted to give Murty a reminder, he would have left him in a heap with a bloody nose, accidently stood on his nuts and then chinese burned him when pulling him back up. Gilles earned his red cards.
Posted by Ted at 14:36