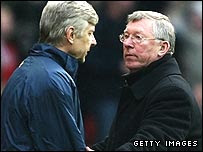 Another defeat, I don't know whether to laugh or cry, as I'm feeling a rather strange mix of emotions at the moment. One thing I'm sure of is that we have a great bunch of players who gave it absolutely everything today and a manager who is not far away from assembling his third great side. Not many sides go to Old Trafford and put in such an excellent all round display, but quite a few get done by some rather dubious refereeing decisions.

Song started at centre back with Toure continuing in his right back role, while Emmanuel Eboue continued at right midfield with Gilberto coming in for the injured Flamini. United played Rooney on his own up front, with Park and Ronaldo on the flanks. We controlled a lot of the possession in the first half, at one point I noticed we had 75% to United's 25%, and we did create some decent openings. Ferdinand made a good block from an Adebayor right foot stab, while Ade should have done better when one on one with Van der Saar, shooting straight at the keeper. United created some good openings at the other end and looked dangerous on the counter, Rooney forcing one top save from Jens' left leg. On the balance of chances nil nil was fair enough at half time. Of note the much maligned Eboue had a rather decent first half, creating openings in forward areas while tracking back to good effect.

The second half was a slight more frantic affair. The opening goal came when Van Persie whipped in a great cross, Ferdinand dithered, and Adebayor finished, it was slightly fortunate as it appeared to go in off his hand, either way the goal stood. We also came very close to a second as Van der Saar made a great save from a goal bound Ferdinand volley. Typically the lead didn't last long, a harmless prod into the box hit William Gallas's arm, it appeared that he was trying to chest it down, but he misjudged the flight of the ball. Howard Webb did no hesitate, rather tellingly after the game Rio Ferdinand described the penalty as 'fortunate', meaning that I hardly need comment further on the softness of the decision.

We continued to look the more likely, a Clichy cross agonisingly hit the base of a post following a Wes Brown deflection. Anderson and Tevez came on for United, while Walcott replaced the surprisingly effective Eboue. Manu then created their best and only decent chance of the second half, Lehmann made a great block from a low Rooney shot and the ball broke on the edge of the box, Evra nicked it beyond Gilberto but Gilberto made no challenge, Evra tumbled, another highly contentious decision from Webb. Hargreaves did expertly dispatch the free kick, showing what he could do when not trying to dictate decisions in the referee's face.

The game was now stretched, we pushed hard for the equaliser, two of the best chances falling to the head of Bendtner, one header was mistimed while the other forced another top save from Van der Saar. Tevez and Ronaldo continued to slide in late whenever they were tackled, one especially late effort from Ronaldo on Toure strangely didn't bring a yellow card from the inconsistent Webb. Amazingly the players fought to the death, not really showing as much tiredness as one would expect following their recent exploits, Gael Clichy summing up for me what a great spirit Arsene has cultivated in this side with another truly monumental performance. Song did admirably given his inexperience, making several excellent well times interceptions and using the ball cleverly at times. Gilberto started to look like his old self, and showed for me that we must hang on to him if Flamini does not sign a new deal. Van Persie linked up play well and some sharpness appeared to be returning, while Fabregas ran his socks off yet again.

I am sure the usual suspects will continue their chorus of moaning doom and gloom, but I saw nothing today that did not fill me with a lot of optimism for the future. Undoubtedly we need more goals from wide midfield and we have conceded too many goals at home against weaker opposition, but today's performance was outstanding and with a little luck we could have come away with at least a draw. It's a great shame that this season has turned into the season that might have been, but sometimes that not an awful lot one can do about that.
Posted by 1979gooner at 18:43

Good article. I think it was a penalty by Gallas - perhaps a bit soft but a penalty nonetheless. We are so mentally weak when 1-0 up, and so mentally strong whenm 0-1 down. It is so frustrating!

I've already noticed a lot of Ade bashing going on elsewhere in the Arse-press. The thing is, he has had to setup up from being the supporting striker to a selfish Henry, to irst choice striker in one season (playing on his own upfront for most of it, which is the hardest role in the game), and he has still managed to score 20 in the league.

He may not be the best in the world technically, but give the lad a break.

1979, can you change the voting thingy so that it shows who people think should DEFINITELY not play next season?

Eboue, Gallas, Senderos, Adebayor to be included. I am hoping Eboue wins/loses hands down, but also that Ade gets no votes, and Gallas a few.

Good article - keep it up, and sod the fair weather, doom and gloom merchants

Anyone else thing that Alex Song has played quite well when called on this season? If Djourou comes back into contention then there is decent competition for places at the back.

I thought it was an excellent performance. We should've taken the lead in the first half. Ade has had a great season and I did not expect him to do so well but he should've taken at least one of those chances - he'll get better but he should work on his first touch and finishing in the summer.

I thought it was a penalty and annoyingly conceded by our best defender and captain. Gallas has been getting on my nerves since his sulk at Birmingham - I'll write a seprate article at some point.

What was terrific was the way that the whole team kept going until the final whistle. Unfortunate result but very good performance. Agree that Song was excellent and think we should try and hold on to Gilberto regardless of the Flamini situation. If Arsene is really only going to sign one top player in the summer then we need to keep our current squad together.

agreed. Gilberto was great, as was Song.

Eboue wasn't bad either, he's worth keeping in the squad I reckon, despite what some say.

Thanks for the articles. I'll just say that I'm a Chicagoan that started to watch and pull for Arsenal about four years ago. And there are hundreds of us here that frequent the few pubs that do show soccer. While quite disappointed at the dramatic turn of the season over the last few months, now would be as good a time as any to think back to the tempered expectations most folks had for this squad going into the season, and the unquestionable overachievement of this team. I've got my thoughts on a few players who've annoyed me at times and who I'd probably not shed tears over seeing depart, but I'll reserve that for later. For now, I'll try to think positively. I will say, though, that I've never been more emotionally attached to a sports team quite like this team.

Specifically as it pertains to the Man U game, you could say that the Adebayor goal very well could've been hit in by his arm and that the penalty kick was a sort of recompense for that. However, I've gone back several times to review the play leading up to the Hargreaves free-kick and I'm failing to see the justification. The way this finished seems to represent the proper punctuation on a very strange, inauspicious series of games that have been played the last several weeks. Chalk it up to bad luck and hope the chemistry of this team gets even better next season.