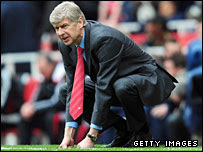 I've calmed down a little, but there is still a little steam rising from my ears having just seen yet another big decision go against us and having watched Liverpool bend the rules on their way to another very undeserved draw. I won't deny that we were poor for the first twenty five minutes or so, we were; however Liverpool didn't create much, and the Arsenal machine did click into gear on about the half hour mark. Bendtner looked too isolated on his own up front, while the three man centre midfield didn't really function as Arsene would have hoped, Walcott did look excellent on the left flank though.

First Eboue broke clear down the inside right channel, but failing to bring the ball completely under control he crossed a bit too late enabling a Liverpool clearance rather than an Arsenal tap in. Next Bendtner found himself with just the keeper to beat but shot straight at Reina. Just as we looked the more likely Liverpool scored, Crouch was allowed to cut inside and he shot low past Almunia into the corner of the net. So at half time Liverpool led one nil, after a half which was pretty finely balanced.

During all this Liverpool had been up to their usual tricks of fouling cynically whenever one of their players was beaten by an Arsenal player, Traore was fouled four times on one excellent mazy run and eventually lost the ball but surprise surprise the ref felt no need to award a free kick. Arbeloa was guilty of cynically tugging back Eboue when in a very dangerous position and there were countless other examples of cynical little tugs, pulls and trips. The referee failed to punish these deliberate fouls which then allowed cynicism to flourish for the rest of the match.

The second half was a different game entirely. We dominated from start to end. Toure almost got the equaliser with a decent header from a corner that flashed just wide, Carragher made one excellent last ditch clearance to prevent what looked like another Arsenal tap in. Bendtner got the deserved equaliser when headed home powerfully home from a good whipped in set piece, as the dodgy Reina again demonstrated his incompetence at dealing with crosses. We then huffed and puffed hard but couldn't get the elusive second goal. Flamini tested Reina from the edge of the box with a fizzing drive, while a few loose touches at key moments cost us dear, for example Hleb's poor touch when presented with the ball in space only ten yards out from goal. Liverpool had one chance, a very good one too, which Voronin wasted by blazing over.

Liverpool continued their cheating. Lucas was extremely fortunate to escape punishment for a blatant tug on Fabregas's shirt in the box, while Theo was left fuming as yet another Liverpool obstruction went unpunished right under the blind linesman's nose. The young debutant Plessis was also extremely fortunate to escape a mention in the referee's notebook as he twice went in dangerously with studs up, while Arbeloa hardly went ten minutes without committing a foul.

Our squad is looking desperately thin and there are still two massive games in the week ahead. Overall I think the players out there did reasonably well today and were unfortunate not to get the win that Arsene was clearly rather desperate for. Eboue did look poor again and failed to take advantage of some great openings, while Hoyte did not look the part defensively, but he's hardly been given a run of games to get a feel. Traore performed admirably, while Walcott was a constant thorn in Liverpool's side and must surely start in the Champion's league tie in midweek. I just hope that we get the big decisions going our way in mid week, I don't know how much more of this I can take.
Posted by 1979gooner at 15:26

Liverpool cheated in the second match at Emirates too!!!


P.S: I have an Arsenal blog too, and i have added this blog to my blogroll:D

Don't worry about the penalty not being awarded mate. Bendtner would have saved it anyway!