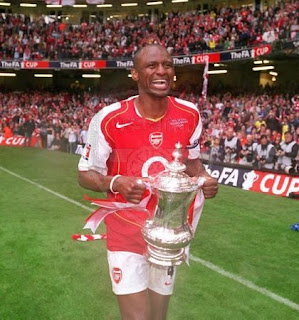 I think everyone needs a bit of old fashioned R&R this week, especially with 1979Gooner on the warpath. So who better to drag out the archives than the mightiest warhorse that I have ever seen in Red & White - the one and only Paddy Vieira.

One of Wenger's first signings (with Remi Garde), Paddy joined in September 1996 for £3.5m from AC Milan. I think the Milanese are still bitter about it.
Its hard to do Paddy's career at Arsenal justice in a short blog. But this is why I loved him.

Patrick Vieira was an awesome player in the proper sense - he inspired wonder. At 6ft 3" he was something of a lanky giant in midfield and the immediate impression was that he might be some form of clone of Carlton Palmer.
However, his technical ability was simply awesome with quick feet, a deft first touch, a good passer, a good header and the finest two footed lunge the world has ever seen.

The late 1990's was the end of the hard-man era in the Premiership. Roy Keane at Manure, Vinny Jones winding down at Wimbledon, Neil Ruddock eating pies at West Ham etc etc. Vieira was not cut of the same Anglo Saxon cloth as his contemporaries, but he recognised a cunt when he saw one and was more than happy to kick it in the head. The head-to-heads with Roy Keane were simply awesome and I don't think the Premiership has been as good since then.

Arsenal's leader and Captain after Tony Adams (the legend) retired in 2002 to shag Caprice, Paddy scored 34 times for Arsenal in 407 appearances. However, the statistic that you won't find is the number of times during those 407 games that the entire Arsenal team, the following supporters at the ground, watching on the TV or listening on the radio, looked to the mighty Vieira for inspiration and leadership.

He was a sensational athlete who was as good in the 90th minute as he was the 1st. Tons of stamina and good acceleration meant that when Paddy picked the ball up with space in front of him, even on the edge of his own box, the entire Arsenal faithful would raise the roof in anticipation of the cavalry charge that was about to be unleashed.

Always happy to court controversy, Paddy never accepted losing and picked up 9 red cards whilst at Arsenal. The press loved and hated him in equal measures. ManUre, Chelsea and Real Madrid all made huge public efforts to sign him but failed. Opposing fans were unanimous in their public hatred and private admiration. Even whilst Adams was still at the club, Patrick Vieira became The Arsenal, woven into the very fabric of the club.

Wenger felt that Paddy's abilities were perhaps fading by 2005, when aged 29, and sold Paddy to Juventus for £13.7m in the summer of 2005. No doubt the emergence of Fabregas as a young player was also pivotal in Arsene's decision.

Fittingly, perhaps, Paddy's final act in an Arsenal shirt was to score the winning penalty against ManUre in 2005. A true Arsenal hero.
Posted by Ted at 13:35

Vieira is in my all time Arsenal XI and vice captain - still don't think you can take it away from Tony. He was a legend. When Vieira, Pires and Henry were on their game no team could match us. If only he'd carried out his threat to do G Nev...