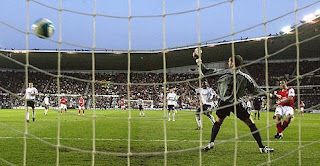 A performance that rather summed up our season, some fantastic football at times interrupted by some rather embarrassing lapses in concentration at the back. Derby tried hard, but effort without quality to back it up is rather useless and it always appeared that we had several further gears which could always be used if necessary.

Bendtner opened the scoring following a bit of Derby pressure, a neat one two with RVP and a cool slotted finish put us one up. RVP then missed a sitter, just before McEvely equalised as he was afforded far too much time and space to control the ball (possibly with his arm) and stab home past a helpless Fabianski. RVP then scored a cracker, a chipped ball through from Kolo sprung the Derby offside trap and he chested down, and neatly volleyed home into the roof of the net from ten yards, 2-1 at half time. Worryingly RVP came off at half time with yet another muscular complaint.

The second half saw us start very brightly indeed, some lovely passing and movement saw several glorious go begging with Walcott and Adebayor the chief culprits. Ade did make it 3-1 eventually when a tapped home following Eboue's stab on, only for Derby to pull another goal back, Earnsham's clever movement and Gallas' rather nonchalant defending combining to put Earnshaw through to slot home neatly. This spurred us back into life and three splendid goals followed, Walcott's deadly finish along with two tidy Ade specials, 6-2 it finished. Mind you with a less retarded linesman and some better finishing it could have been over ten.

Overall it summed our season up well, there's just something not quite right defensively. We seem to lack a bit of aerial prowess at times, although we do have plenty of pace, the disruption to the settled back four following Sagna's injury certainly hasn't helped. Song looks a great prospect, but is centre back his best position? If Flamini goes then the path may be clear for Song's arrival in the centre of the park. There's certainly no major surgery needed, but things do not seem solid enough for me at the moment. The Gallas Toure partnership has certainly been our best pairing and should be our starting combination for next year.

I was impressed by the bustling of Denilson, a clever footballer who reminds me a little of Paul Scholes, except he's not such an ugly c*nt. While Fabregas is such an outstanding player it's simply a pleasure to watch him play. Walcott has developed fantastically well this year, he looks an awesome player already and he is definitely more at home on the left than the right. I shouldn't forget to mention a certain striker called Emmanuel Adebayor who has proven his quality this season, a great goalscoring record and a great team player, he's imporving all the time as well. Eboue hasn'y been as awful recently, he worked hard and put in a few good crosses last night, but he remains the weakest link in our midfield and I really think a top quality right sided player would add tremendously to our chances next season. The future is bright nonetheless, come on you Gunners.
Posted by 1979gooner at 10:52

Interesting comment about Song. If we lose Flamini, which looks quite likely now, do you think we have enough cover for centre midfield next season with Fab, Gilbert, Denilson and Song? I guess Rosicky, Hleb could also play in the midddle if Fab was injured. Diaby should also be able to play there somewhere if required.

Having initially thought that Flamini must be locked in an Austrian basement until he signs a new contract with us, I am beginning to think that Arsene likes what he sees in Denilson and Song....

Don't think we will win the Premiership with Song in midfield - good squad player but don't think he is quite ready for regular first XI. Also think Gallas and Toure have regularly shown that against the best they are not good enough - I maintain that we need a top notch dirty centre back in the Keown mould.

Really sad that it looks like we have lost Flamini - he has been brilliant this season and will be much missed.

On a more positive note was delighted to see 4 of our players in the Premiership team of the year - more than any other team. Well deserved by Saggers, Clich, Fab and Ade.

At the start of the season, if we had been told that it was to be Flamini's last, I don't think we would really have cared. He has had a good season, but to be honest I am not sure how big a loss he would be. What is frustrtaing is that we can't get any money from him to re-invest in another similar player - and there are many more midfield holding players than quality playmakers out there. Still, it is fate for getting Sol on a free - only Flamini isn't going to Spurs.

was chatting to my old man about the flamster, and it's remarkable how players that leave us rarely go on to look as good elsewhere,

this tends to insinuate that part of someone looking so good for Arsenal is down to the overall setup, the coaching, the players around you, the ethos

I'd prefer to see Flamini stay but whoever Arsene rates could step up I reckon, Song and Denilson look great prospects to me

I think wide midfield on the right is a more problematic position, I agree with Ted on a certain pompey player.....

Henry was probably a case in point last night for Barcelona - a shadow of his previous menace against Manure. It's sad to see Arsenal's greatest ever player being used as an ineffective sub and then being virtually marked out of the game by Owen Hargreaves. I still don't see why Barca bought him.

In fact, anyone else think that Messi apart, Barca are a bit shit?

They have lots of possession but barely created a single decent chance over two legs.

I agree, they looked toothless.

Other than Messi, I thought Iniesta was brilliant, everyone else was a dissappointment.

No end product at all, Etoo was woeful.

Nothing like the side that beat us in Paris, they don't even play as a team, just a bunch of individuals.

Agreed. Very disappointing that Barca did not show more. I like Xavi and Toure but they didn't play well. Messi is magic.

I'm starting to be more positiive about our season - if we could finish a maximum of 4 points behind the eventual winners that would be a fantastic achievement given what everyone expected at the start of the season. Who knows we may even get closer than 4 points...