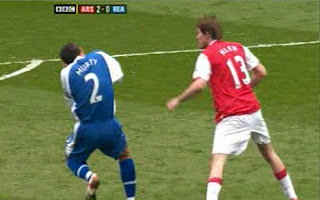 Another great example of the FA's incredibly inconsistent disciplinary system looks set to be the case of Alexander Hleb and a small slap of Graham Murty's face. If the FA look at this incident and ban Hleb for three games it will perfectly encapsulate how their disciplinary system reacts to the media and not directly to events on pitch.

How many times have we seen an Arsenal player slapped as Hleb slapped Murty with nothing happening because the media and the FA chose not to react for no good reason? A recent example was Owen Hargreaves slapping Gilberto in the face at Old Trafford, and this was after Tevez had left his studs in on Gilberto's shins. Strangely no one mentioned this on the TV, the referee did nothing at the time and Hargreaves got off Scott free. And who could forget Ruud Van Horseface's uppercut on Freddy Ljungberg that was caught on camera, the referee again did sweet FA, while the media and the FA chose to ignore the incident.

It is also rather revealing that whenever an Arsenal player is slapped in the face, that player is accused of overreacting, however when an Arsenal player does the same to an opposition player it is highlighted and seen as a definite red card. Cesc Fabregas has been slapped in the face on several occasions this season and I cannot recall a single one of his slappers being punished for their actions. This seems a tad fishy to me.

How much longer must we put up with the FA's pathetic excuse for a disciplinary system? I think it will be a while before they try to sort out their biased and haphazard system. They continue to ignore calls for integrating technology into the game , while other sports forge ahead by using technology to their advantage. Just who is in charge of the FA? Are they just incompetent or do they deliberately reist change so that they can continue to selectively enforce the rules of the game in a way that favours certain clubs?
Posted by 1979gooner at 17:57

you're a disgrace k man!

you're a disgrace k man!

you obviously have a keener eye for fishy slappers

Myles has got quite a good bit of analysis on ANR of our annual accounts for th year.

It's a bit noddy at times, but does show that;
a.) There is some cash there for spending now(£20-25m)
b.) it spend on the targets w have been linked with (Villa, Benzema, Ben Arfa, Gomes etc.) we will need to sell to make more than one signing (or borrow more, but that will depend on gearing of the club given th high level of debt already)
c.) The club is very stable finaincially and looks to be being run very prudently by the board and Wenger.

I wish I bothered to spell check before posting.

As a drunk paraplegic, I find your comments extremely rude. Especially as anyone with a brain would realise that a paraplegic would have to use voice recognition to "type". Idiot.

Thy can use dribble recognition nowadays as well. Idiot.

Just had a thought. Helb's great but doesn't score goals, and we could sell to inter for £10-12m.

Modric is great and can score goals, and will cost about £10-12m. Now I am a Hleb fan, but also accept he hasn't delivered what we need in terms of end product, even if he facilitates the style of football we pay to watch. 11 goals in 3 years (and probably about 20-25 assissts - and 100-150 chances put on a plate for other players who didn't take them) doesn't giv us what Pires, Overmars, Freddie and even Reyes and Parlour gave us.

I think it would be good business. And Modric doesn't like ice-cream apparently.

I'm with you up to a point, but unless we are confident that Modric is going to be better than Hleb, then are we not just swapping players for the sake it? It was quite fun with Gallas and Cole, and worked quite well on that occassion, but the circumstances were different in that Cole was absolutely dead set on leaving.

I haven't seen that much of Modric. He looks ok for Croatia, but I think we already have the star Croatian in Eduardo and Krancjar also looks ok.

Also, Modric is a similar narrow winger to Hleb and may not offer much different.

For my money, Hleb has finished the season well and we should keep him if we can. If AW wants to add Modric to the squad then thats also fine by me, but I want to keep as many of the current first XI as humanly possible. Especially with the doubts surrounding Flam and Giblet, losing another would not be good news.

How about a Hleb-Krancjar merry go round then.

My feeling is that Hleb had an ice-cream bhind Arsene's back, won't play again this season and will already be talking to Inter. We can get good money for him, which Wenger can re-invest.

I rate Hleb, and just want to know that if he does go, a similar quality player comes in, or mayb a player more suited to playing wide. Of all the potential losses, my feeling is that Hleb will b hardest to replace.

http://world-legend.blogspot.comhe is living legend in the world .please if do u agree with my point of views so please visit on this link