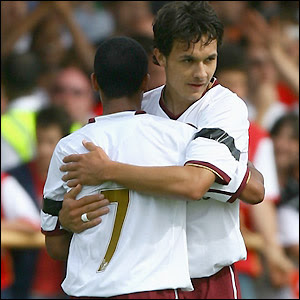 We all know that Arsene is likely to dip into the transfer market this summer, but is is just as likely that the next sparkling talents to emerge in the Arsenal first team will come from within our own walls.

Nacer Barazite is surely going to get his chance at some point next season, the pacey direct attacking midfielder has impressed in the reserves this year and spoke of the the quality we have at the reserve team level. It seems that Armand Traore may well be moved up to the left side of midfield next season, a role for which he appears well suited given his pace and sweet left foot.

Denilson was also back in action for the reserves, another highly gifted youngster who has impressed whenever he has featured in the first team. The young french striker Gilles Sunnu may be a little further away from the first team, but seems to have been impressing Neil Banfield and got his first goal for the second string last night. Another young south american talent Pedro has reportedly signed and is to be shipped out to Salamanca next season in Vela fashion.

It's easy to get carried away and dream of sinking a 100 million on new faces, and some bloggers do enjoy feasting in this kind of Championship Manager like frenzy while unfairly writing off good players that we already have on our books. These armchair gurus have rather selective memories, conveniently ignoring the hundreds of donkeys that they have suggested as suitable transfer targets for Arsenal over the years, while only remembering the odd success story that they had predicted simply by chance. It must be remembered that it is easy to spend millions on dross, while too many new faces can seriously disrupt the team and squad that one already has in place.

So without any new signings we will already have Carlos Vela returning from Osasuna and Eduardo returning from injury, while the likes of Barazite, Traore, Denilson will also be pushing hard for starting positions. We do arguably need one or two top quality additions to our squad, with right midfield looking the position that most needs refurbishing, however I'm sure Arsene will want to ensure that there is some room left, in which our great young talent can emerge.

ps spare a thought for poor old big Phil who is reportedly distraught after the Liverpool defeat, he's had a decent few months aside from that game and comes across as a truly lovely bloke
Posted by 1979gooner at 21:53

I for one don't want us to go and spend big this summer unless we have to. I've said before that Wenger has two decisions to make on the medical futures for:
1. Rosicky
2. RVP

Those two are class players and if Wenger is not confident he will get at least 30 games from them next time season, then he needs to buy experienced replacements. Wenger has never gone for big names, but I would not be surprised at someone like Krancjar or Muntari joining from Portsmouth.

Anyone who comes in must be better than what we have already, such as Sagna - no-one saw that coming.

If Rosicky is fit, we don't need anyone else in midfield. Add Fab, Flam, Hleb, Walcott, Eboue, Gilberto, Diaby and Vela you have enough.

Likewise, if RVP is fit, then Ade, Eduardo, Bendtner (maybe with Hleb, Vela, Walcott depending on formations) will add the firepower up top.

So my prediction is that Wenger picks up an experienced left footed player, probably defensively minded, probably as a squad player as cover for Clichy. And we will probably never have heard of them.

I reckon we need a right sided player more than a left sided one.

We have Vela returning plus Traore is being converted into a midfielder, so could cover left back or left midfield, Rosicky can also play on the left.

It would be nice to have someone with a nice right foot, a bit of pace, an engine, who could bang a few in on the right of midfield.

For me Walcott is a striker, or can do a job as an inside left, but I don't like him being used as a right midfielder.

Mark Randall hasn't got many games under his belt at Burnley, I doubt he'll be quite good enough, you never know though.

So where does Hleb fit into this master plan?

good point, forgot about him!

I like Hleb, he just doesn't give us width, he's definitely more effective when floating around in more central areas.

I think you can get away in midfield with one player who like to play more infield, but I think it's harder to get away with two.

I'd get rid of Rosicky given his age and the fact that he is never going to play 30 games in a season.

I'd bring in one goal scoring wide man to give us the following players who could play right or left midfield:

That would give a nice balance to the squad I reckon.

What would you do?

Its a tough one and I think this highlights the problem of trying to go and buy success.

Rosicky is not flavour of the month. But on paper, he remains an excellent prospect. He is 28 this year and is the Czech Republic's star player. 6 goals from 31 starts last season and 7 goals from 19 starts this season is a more than decent return from midfield. Turn that into 14 goals from 38 starts next season and you have a top performer.

Hleb's 4 goals from 38 starts this season is not impressive by comparison, yet the general view is that he has had a decent season and has a future at the club.

I like Hleb, I really do, but I also like Rosicky. He is a genuine talent that would need a big budget to replace.

I might be wrong, but the chances of Randall or Traore getting regular Prem appearances next year on the wings seems extremely unlikely.

The wide midfield players are likely to be chosen from Hleb, Eboue, Rosicky, Walcott (i can't see him playing up top that often), Diaby, Vela. Of those players, only Vela and (bizarrely) Diaby cannot play on either side of midfield.

I also agree with you about playing too narrowly in midfield. A first choice of Rosicky, Flam, Fab and Hleb lacks width and size. Its 4 small centre midfielders. However, it is also capable of playing some outstanding football,

So what would I do? Well, I think the crucial information is the medical opinion on Rosicky's legs. If the mystery injuries are likely to contimue then Wenger needs to go out and buy a replacement.

Problem is that it would take someone like Riberry to replace him. Unless a player is available who Wenger genuinely thinks will be first choice next season, then I would prefer to stick with what we have and see how Vela and Walcott develop as wingers. If they do well, then either Hleb or Rosicky's positions are up for grabs.

Can't believe Henry got paid £10m in his last season. Just goes to show what a fool David Dein really is. Its also frankly appalling that Henry's agent, who would have taken a healthy slice of that moolah, was Dein's son. I bet he got a similar signing-on fee at Barcelona as well.

What's with the deleted comments?

My vote is for:

1. a top notch filthy centre back in the vidic/carvalho mould

2. a decent winger (as well as getting vela in)

3. a keeper to put almunia under pressure (assuming lehmann leaves) - that brazilian from psv looks good...gomes?

I also think we should keep Gilberto, get rid of Gallas and make Flamini captain (or break his legs if he refuses to sign his new contract)....just kidding

I agree with ted, Krancjar looks handy, got all rounder, good shot and not a nancy boy,

There's no way we should get rid of Gallas, he has had a decent season on the whole, Toure has been by far the more dodgy,

I'd spend all the money on that sh*t striker who's 28 and was spotted by Myles Palmer on youtube, oy maybe we should start scouting on Championship Manager?

seriously our good record in the transfer market is down to watching players for lots of games and not resorting to panic championship manager type buys, take not MP

I agree with obsinho. K man is a genius.

k-Man re point (1) - Jodie Marsh is filthy. And probably good from the back.

I think k-man is a genius.

But I also think the performance of Yaya Toure last night was absolutely awesome. He made an absolute mockery of the expected Manure dominance in midfield.

Yes, he'd cost us (I mean you) an arm and a leg but surely Kolo could have a word. Alternatively Gilberto or Flamini could be part of a swap deal.