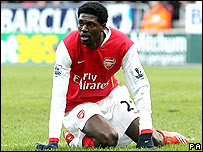 It was never going to be pretty on a ploughed field in Wigan, but we did enough to have won today, I hope that our missed chances do not cost us dear come May. Wigan huffed and puffed but didn't create anything clear cut, Almunia only had one real save to make from a decent twenty yarder in the second half.

Adebayor had a couple of great opportunities, a one-on-one at the beginning of the game when Kirkland did well to close down the angle and block, and the second early in the second half when he would have done better to have opted for a chip over the keeper instead of powering it straight at him. Fabregas was also thwarted by another excellent Kirkland charge late in the second half.

The pitch made it tricky, and this cannot be used as an excuse, I feel the pitch showed up how we lack a cutting direct edge wide in the midfield. Bendtner linked the play well, Adebayor spluttered, but we lacked that Pires or Overmars type player bursting through from the wide positions. Hleb is a great player, but is no wide man, and certainly not a left winger. While our lack of width on the right was there for all to see, Eboue does provide this but is the long term answer? His lack of end product pushes me to say no. Apart from Fabregas I cannot see many goals coming from midfield, meaning that when the strikers or Cesc do not score, it will be rare for us to win.

It will be a close title chase this year, and these kind of missed opportunities may cost us dear. However there is cearly room for improving the current 1st eleven, a top notch wide player with pace, directness and goals would make us that bit more formidable, and would probably convert a few of these draws into victories. Perhaps Carlos Vela is the answer, however next season may be too late for this year's title.
Posted by 1979gooner at 18:38

"however next season may be too late for this year's title"...

genius insight that mate, keep it up!

totally agree that we need a goal scoring winger - rosicky is always injured, eboue inconsistent and hleb, though excellent, does not provide enough goals.

I did intend a small touch of irony there, but then again I would say that!