Pipped by the classless chavs 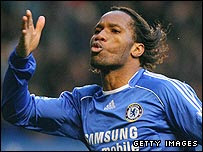 An exciting game, no doubt, Chelsea coming out of the encounter 2-1 winners, leaving us with a very significant hill to climb if we are to win the title this year. The game earlier had been swung by a slightly controversial piece of refereeing, as a lacklustre Liverpool were seen of by Manchester United, but there was no doubt about the key moment that swung today's game Chelsea's way.

The first half was nip and tuck, some good chances at both ends, Gallas hitting the post for Arsenal being the best of the bunch. Frank Lampard routinely demonstrated that he knows not how to tackle, as he slid into challenges getting nowhere near the ball, somehow escaping censure.

A brilliant header from Bacary Sagna at around the hour mark put us one nil up, we then looked very comfortable in the lead, looking more likely than Chelsea to score the next goal of the game.

The linesman then went missing. Drogba and Anelka were both clearly a metre offside in the centre of pitch when the ball was lumped up towards them, Drogba then scored in the proceeding melee, a goal that never should have stood.

The game then turned, Chelsea had the momentum. Anelka missed a good chance when again over a yard offside, before Drogba scored the second. Notably there was also a good little push on Toure by Drogba which allowed him the space to shoot low to Almunia's right hand side.

At two one down we never looked like equalising, the offside goal had completely transformed the game, our obvious lack of width was made more prominent by Sagna's injury and Eboue's consequent shift to right back. The Ivorian did actually have a decent game giving us some much needed width, especially first half.

Two incidents stood out for me today, both of which demonstrated the complete lack of sportsmanship and class that Chelsea possess. In the second half Eboue had put the ball out when he saw that Joe Cole was down injured, when play resumed Chelsea deliberately kicked the ball into the corner and pressed us there, in fact they scored not long after this incident in which play was shifted from one end to the other by our sportsmanship and their complete lack of it. Then in injury time on the the Chelsea coaching staff refused to give the ball back for an Arsenal thrown in, utterly pathetic stuff.

I'd be embarrassed to be a Chelsea fan given these two incidents, mind you most Chelsea fans lack the necessary grey cells to realise their own lack of class; they certainly demonstrated their lack of intelligence and loyalty in the second half by barracking their own manager for the umpteenth time. What a fickle bunch they are.

Our players gave everything today and it wasn't quite enough, small decisions change games as was shown by Drogba's offside goal. Who knows what would have happened if this goal had not stood, maybe Chelsea still would have won, or we may have killed the game off with a second. Either way money cannot buy you class or respect, something Chelsea would do well to learn.
Posted by 1979gooner at 18:37