Gooner blogging round up 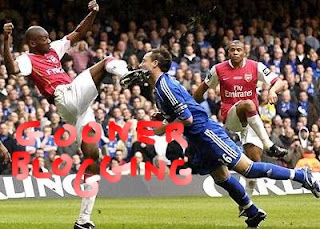 A cultured left foot has some interesting views from Terry Neill that give a fresh perspective to recent events. Highbury1913 reveals next season's money making new kit to all the world. Insidearsenal counts down to rocky day and wants some noise! LG makes a point about luck that I agree with, lady luck has gone missing for us in the last month or so.

Arseblogger speaks a lot of sense in his stout defense of the mighty Emmanuel Adebayor, while I am inclined to agree with him that Toure should replace Sagna at right back, with big Phil returning in the centre.

Cesc has dumped his agent, leaving the path clear for us to have to endure yet more unfounded banter from the tabloids, Wrighty7 reckons Barca should do one. Gunnerblog summarises a few transfer rumours of interest and outline the importance of keeping our current crop of top talent at the club. Young Spanish defender Ignasi Miguel has been described as the new 'Thuram' by UD Cornella's sporting director, praise indeed. While Tim Sherwood ably makes the case that he is one of the most stupid men to have ever plied their trade with the scum.

The malignant Daily Wail's pathetic attempt to spin the Gallas story was nicely mocked by the Arsenal FC blog. Nacer Barazite continues an impressive season with another goal, this time for the Holland under-19s. The Cannon rounds up the week's international action.

LeGrove speculates on a couple of transfer rumours and brings up the topic of Henri Lansbury, having read a certain story on Young guns about the former's alleged party lifestyle. Having a quick peek at Henri's myspace profile I wonder just how wise it is for young footballers to have so much information about themselves in the public domain, do their agents have brains?

Meanwhile Eduardo is recovering well, and hope remains high that he will be back to football at some point next season. And finally here's another reminder to pop by David Rocastle's memorial site.
Posted by 1979gooner at 11:56

Labels: Gooner blogging round up 1