Pipe down you unemployed imbecile 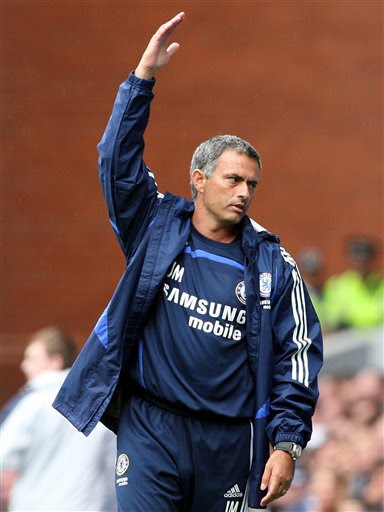 The small man who masquerades as a rather vain egotistical Portugese by the name of Jose Mourinho has been shooting off his dysmorphic mouth yet again. He really is so foolish and petulant that he continues to insult those he used to compete with in an immensely bitter and disrespectful manner. Some things never change, some people have absolutely no class at all, and that appears to never change. The likes of Mourninho are hypocrites of the highest order, behaving like a 3 year old with an ASBO while aiming cheap pathetic insults at everyone else. His latest comments aimed at Arsene Wenger included:

"A unique team - their coach hasn't won for years, but he's an idol," said Mourinho. "There are no pressures at Arsenal. But do not say he's growing young players into talents, because he takes jewels and polishes them."
Oh dear, he has once again spoken without engaging his small and rather lonely brain. His solitary grey cell must be in desperate need of some company. It is quite amazingly stupid to criticise what Arsene Wenger has achieved at Arsenal with such limited resources, he only makes himself appear ignorant and bitter. Mourinho himself spent millions and millions, brought through no young talent, and then bottled in when things got tough, hardly a strong position from which to speak out.

Arsene as responded promtly to Mourinho's ill informed raving, with his typical veiled digs that nicely put Mourinho is his lowly place:

“Winning cannot be everything,” Wenger said. “To destroy people can never be everything. I do not understand those who come out to destroy people, that is not what life is about. Why should you always have to kill other people to exist? If you do that then somewhere you feel you are not good enough.

“What is important for me is to play in a fair way and in a way that people will enjoy. A trophy is what you can show, but the way you play, the way you behave — these are also important. To win trophies is important, but that is not the only thing in sport. Moral integrity is important. For me sport is more than just winning trophies.”

Winning is important, of course, however winning is not everything as Arsene says, the way one does things does matter; Mourinho has showed us that winning at any cost whilst behaving like an uneducated moron and encouraging negative and cynical football is not something to strive for. The way in which Mourinho's sides behave as regards their intimidation of officials, feigning of injury and diving show Mourinho to be a man who has little moral fibre, a man who wants to win at any price, even if that means losing his self respect in the process. Mourinho has sold his soul and as a consequence is a very bitter and angry individual. Morals and ethics are important Jose, you may have a few trophies in the cabinet, however you will go down in history as nothing more than an arrogant spoilt brat.
Posted by 1979gooner at 09:08