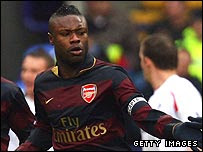 The first half at the Reebok summed up our last few weeks, somehow we contrived to be 2-0 down in a game that we shaded, to put it mildly. Bolton rarely threatened, but managed to open the scoring against the run of play with a well taken headed goal and then fluked a second with a rather fortunate deflected effort.

At the other end we had missed chance after chance, Van Persie shooting straight at the keeper when it would been easier to score, Flamini blazing over towards the end of the half and numerous other decent half chances. In between the penatly box profligacy Diaby was sent off for a bad tackle that merited its punishment, it's just a shame that so many equivalent tackles by Bolton under Allardyce's regime were not punished like this. Meanwhile Gavin McCann was allowed to foul with relative impunity for the whole ninety, good old English football I suppose.

The second half was contrasting to say the least, Bolton missing a couple of half chances before we finally made some of our chances count after Walcott and Adebayor had come on for Senderos and Bendtner. First Gallas snuck in at the back post to slot home, then RVP dispatched a penalty after Hleb had been taken down crudely in the box. We then had a few chances to win it, before Fabregas fluked in a effort that took more than one deflection on its way into the Bolton net.

We bloody well deserved a bit of luck at long last, and a lot of credit must go to the players who had the belief and character to come back with only ten men. There are still some glaring deficiencies in our side that must be remedied in the close season, the lack of goals from wide midfield and the lack of width have been there for all to see of late. Not to dwell on the negative, it is especially satisfying to turn over Bolton in such a manner, given their negative style of play and rather pathetic hatred of all things Arsenal that had been drummed into them by the fat walrus Sam Allardyce. This one was for you big Sam, I don't know if us gooners could live with ourselves if we end up helping send Bolton down a division.
Posted by 1979gooner at 15:45

I started watching the game on 16th minute when Arsenal was 1-0 down and the commentators was fking Arsenal around like they always does..and the first word from my mouth was "DAMN!"..we were 1-0 down again and so early...so early game me some hope to keep watching.

Then came Diaby's stupid and unwanted tackle and it could have caused much serious inury although the bolton prick made so much fuss about it..not that bad compared to the tackle on Eduardo..correctly red card..I believe Diaby can be a good prospect but he needs more games..which will be best for Arsene Wenger to send him out for loan.

After the sending off I kept watching with no much hope..and came Taylor's goal..damn why did the Arsenal players (clichy and flamini) passed around the ball so near to the goal and they was punished..deflection off gallas not senderos..2-0 down and a man down..i switched to discovery channel and realised there was no hope.

After a while i switched back to the game..hoping for a miracle and damn i was proven loser for not watching the game fully..it was 75th minute and arsenal was 2-2 (great comeback!!)...and i prayed from that point to the end for a winner, just seconds before Fabregas's deflected shot i was thinking that i will take even a scappy or own goal..and bang goaallll!!

Damn that was huge relief after the draws and loses plus it was a superb comeback! Great to see the confidence in Van Persie penalty and he got a goal which will be a great boost for him. All players showed the hunger and passion to win and a great character to comeback from our bogey team with 2-0 down and 10 men in a horrible condition away from home. Everything and everyone was againts Arsenal getting something out of the game (including me!) but the proved everyone wrong and crafted a great comeback to turn around bad form..hope they will carry on the confidence into the triple header with liverpool and defeat MU at old trafford...and till the end of the season!

Only one area Wenger should change which is to start Walcott instead of Diaby on the left..ahead of Eboue..he was electrifiying and his pace will trouble anyone..and he is getting better and better with each game, never had a bad game at all this season..just love the way he ran and created the chance for Van Persie but VP missed the shot totally.

Overall a great relief and hope this win will bring the lads back to the form which they had before and push MU until the end and win the title! 6 points behind and they still have to play at Stamford Bridge and we have to play them at OT.

And all of the press/media n arsenal fans that was hunting Gallas down for not being a great leader eat your words and go fly kites! He scored the turning point goal and he lead the team by example. His attitude at Brum showed a true leader that cares about the club more than his dignity and selfrespect. As wenger said when the team was winning Gallas was praised and now when the team start on a bad form (over now) everyone start hunting him down??! Pricks!
He is a true leader and a born winner, that's why losing and drawing matches is hard for him..for me and many of you too!

ARSENAL ROCKSS!!!!!!!
And'
Bolton is going to get relegated because of ARSENAL!! Double joy!!!

I agree about Walcott, he's come a hell of a lot this season.

I feel a tad sorry for Diaby being played out of position time and time again.

Maybe the discovery channel is a lucky omen? Get watching on wednesday!

Let's hope this little luck grows into a much bigger luck come April and May. I wouldn't mind seeing another Cesc shot bounce off the feet of Finnan, Carragher, Kuyt and then into the net.

Can't believe they pulled it off with 10 men and in those weather conditions.

What an unusual 5th goal. The Arse got a bit lucky there.