The loss of control: Stuart Attwell 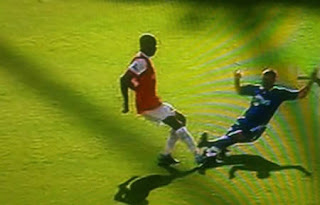 Being a bit of sad bastard I watched the whole game again on ArsenalTV online this morning. I thought I'd review my opinion of the referee's performance and the team in the cold light of day. Stuart Attwell was the referee and I think he brought a lot of the trouble on himself with some poor inconsistent decisions making, although he was certainly not helped at all by his linesmen who were about as useful as stuffed marrows at times.

The game certainly didn't start off as a niggly one. The problem was that the overly physical and aggressive tackles were encouraged by the referee's failure to adequately deal with what went on in the first half. Elmander was slightly fortunate to avoid the book for sliding in late on Cesc early doors, Steinsson was also rather late on Gibbs. Rosicky was nailed late by the sliding Davies on the 15 minute mark, again no card. The first yellow then came for an appalling late lunge on Wilshere by Davies, he could easily have been sent off by now and only 18 minutes had elapsed.

Arshavin should then have had a penalty, Steinsson took his legs before getting the slightest of touches on the ball, the referee was well positioned by choked. The thuggish Robinson then got away with another overly aggressive tackle, this time on Cesc, anyone who knows the game could recognise the deliberate violence in this kind of tackle, the linesman who was a few yards away saw nothing wrong. Kieran Gibbs was then given a yellow card for a tackle which in isolation was a yellow card, however if the referee was to be consistent then he should have booked at least five Bolton players by this point. Again the inconsistency of the officiating was staggering, both teams had one yellow but the nasty fouls had virtually all been committed by the one side.

The first half still wasn't over. Muamba astonishingly got away without a card when he slid in dangerously with his studs up through Cesc Fabregas, for some strange reason the referee felt a talking to was enough. Several Bolton players were protesting to the referee, including Cahill who had run a significant distance to have his 'say'. Cahill also had time to chop through the back of Chamakh when nowhere near the ball. So although there wasn't massive controversy in the first half, if one looks back it is easy to see where and when the referee began to lose control of this game. One has to be consistent and firm to keep control, and the referee clearly didn't do this.

The second half saw the indiscipline spill over, the referee's laxity meant that Bolton thought they could continue to get away with murder. Steinsson was carded early on for a cynical foul when Wilshere was breaking dangerously. Shortly after we had scored to make it 2-1 Davies was very lucky not to be sent off, he went in very hard and late on Koscielny with his head, it did appear that Davies knew very much what he was doing. The ref appeared to bottle this decision, the tension was building here because of the referee's lack of consistency, Arsenal players were getting frustrated as a result of the lack of protection and Eboue was booked for saying something along these lines.

The big moment came with the Cahill red. Bolton claim Lee was fouled in the build up, I disagree, Song did very little and Lee went down very very easily. Arshavin broke, he had to hurdle a reckless lunge from Holden and played a one two with Chamakh, well after Chamakh had given the ball back to Arshavin, Cahill went through the back of Chamakh in a rather nasty two footed manner. It was a clear red card offence and the referee got this correct, there was not intent to play the ball and he went through with both legs straight in a manner designed to maim. Bolton surrounded the referee, who had to back off, Knight, Cahill, Robinson and Davies were all involved.

Control had gone out of the window. Next came the worst tackle of the game. Diaby was played through in the inside right position, Robinson could only beat him to the ball by sliding in recklessly with a straight leg over the top of the ball with his studs up (see above image from Arseblogger). Robinson's straight leg nailed Diaby in his mid shin area and he had to limp off shortly afterwards. This was an appalling tackle, a definite straight red card, and the referee didn't even give a free kick, he was poorly positioned and his linesman gave him no help at all. Maybe there is a case for asking the FA to review this one, Robinson is a particularly nasty player as we have seen in the past, he goes into tackles in a way that will reliably injure. After the third goal the aggression faded as Bolton knew they were dead and buried, although there was still time for Attwell to miss a clear penalty as Muamba chopped down Eboue from behind in the box.

It is always easy to analyse these things in retrospect and Stuart Attwell is only one of many referees who clearly lack a sufficient understanding of the game to be able to control it. However it is clear from reviewing the game that if discipline had been enforced more robustly from the off then we may well have had a much cleaner game and Abou Diaby may well have not been injured.

I listened to a bit of Radio 5 on the way home from the game yesterday and if ever there was a man who sums up what is wrong with the English game then it is Robbie Savage. He openly talked of how Mark Hughes had ordered his teams to deliberately aggressively foul superior opponents, he claimed that young players should be taught to pull shirts and trip opponents. Savage's game, minimal skill and technical ability combined with his persistent cheating and fouling, is a case study in what our inadequate refereeing allows to flourish in the English game. It is only a matter of time before another one of our players gets another shocking injury as a result of this, I just find it hard to understand how so many in our media and within the game can condone this kind of 'football'?
Posted by 1979gooner at 09:14

good post - but - liverpool blackpool, blackburn, bolton have all had a man sent off against us so far this season, that's a 100 per cent record! i wonder how long this can go on? bolton should have had 2 or 3 red cards onbviously, but at least one man went.

refs seriosuly need to get their shit together on this though - aaron ramsey's broken leg ast season came at the end of another game strewn with similarly lenient refereeing decisions. refs are as much responsible for these kinds of leg-breaks as the shawcrosses of the world.

1979gooner, I agree with so much of what you wrote, Attwell plumbed new depths of refereeing incompetence yesterday.

But I have to take issue on your take on Song on Lee (it was a foul) and then Cahill on Chamakh (it should have been a yellow after the advantage had been played). The way Attwell got those wrong made me think he knew he'd got Davies wrong and was trying kack-handedly to compensate. That's probably overstating it, in reality I think Attwell's mind had just gone by then.

There was another incident that really underlined how little understanding of the game Attwell has: a Bolton player committed a foul in the D of their penalty area (i.e. a perfect free kick position) and the ball then rolled back to an Aresnal player close to the centre circle. Did Attwell award the free kick, from which we would have had a great chance of scoring? NO, he played it on as an advantage???! How can it possibly be an advantage in those circumstances? Anyone who has even a basic understanding of the game would know the right decision, but Attwell got it wrong.

who got snet off against blackburn?

the foul by cahill was a red for me, two footed, nowhere near the ball and designed to injure

also Song's was not enough for a free kick

I was at the game and it is hard to see the tackles flying in and whether they are deliberate or not as well as the penalty appeals we seemed to have.

BUT it was clear the ref was so out of his depth from start to finish and the red card for Cahill (which was from behind and 2 footed, how muh more of a red does it need to be? Although Lee "wants soooooo much to be seen to be fair handed and unbiased" Dixon felt it was a yellow!!!) where it was a clear advantage fior us to be allowed to carry on, yet he stopped play!

He is a young ref so hopefully he will get better, well, he couldnt get any worse!

I would like to give Atwell some of the stick Arsenal players had to put up with- tell you what- he would be less lenient with sad and cynical challenges after that. You can tell they have never played the game. All refs at this level should have to have semi-pro or professional experience. Being a freemason is no longer sufficient.

agree on Dixon, he let himself down with that, Cahill's tackle looks really bad when replayed, he follows through so hard with the left leg too, really malicious

exactly, if you have experienced over the top tackles and know what they can do, you will know the difference between that and a fair safe tackle that just misses the ball, the likes of attwell cannot tell the difference

Below is my concern on severe injuries that happened in these recent years of the EPL seasons. I do not know where to put my comment within the proper heading, therefore would appreciate your help.

I am just wondering whether the EPL Competitions from year to year could be unofficially proclaimed (if there is such a thing) as THE MOST OUTSTANDING BROKEN LEGS EVER RECORDED ON ANY SPORT COMPETITIONS IN THIS UNIVERSE.

The cliche is always the same from year to year: "That this is a man's game". I disagreed. For some players, it is nothing short of barbarous.

Any other country with a much worse
reality? Pls share the info.

This won't have effect in reality, that's exactly what I think.