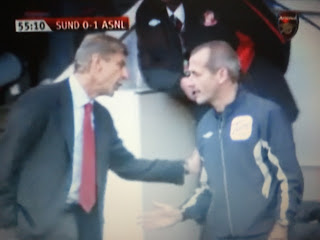 So as expected the FA have charged Arsene Wenger after the media's massive over reaction to some very very mild behaviour on Saturday. In fact the FA charge relates to what happened right at the end of the game:

"Arsenal manager Arsene Wenger has been charged with using insulting and/or abusive language and behaviour amounting to improper conduct. The charges relate to Wenger’s conduct towards match officials at the conclusion of Arsenal’s match against Sunderland on 18 September."


There is no doubt in my mind that the FA have charged Wenger simply because the media have created a mountain out of a mole hill. Some stupid cretins in the press seem to think that gentle physical touching is 'pushing' and almost tantamount to assaulting someone. Touching someone gently can be polite, it can be simply a means of communication, it can also be aggressive.

The photo above shows the most polite of physical contact after Song was sent off, yet some immense imbeciles in the media wanted to liken this to an aggressive assault, utterly ridiculous. What happened after the whistle was pretty mild mannered stuff, not unlike the incident in the above photo. One senses that some small people like Martin Atkinson have too much power to wage their own little personal wars.

What gets me most about this is the rank hypocrisy and inconsistency shown by the FA on disciplinary matters. They let some managers and players get away with murder routinely, some players aggressively manhandle referees with no punishment, some managers routinely berate officials with no consequences. The FA's system is also impotent at dealing with tackles that can break legs like Paul Robinson's the other week. It is strange how these extra time decisions always go for the Manchester Uniteds of this world.

Arsene has to either take the ban and fine, or he has to appeal, the problem with appealing is that his case will be heard by the Kangeroo court that is the FA's 'Regulatory Commission'. This new system of having bans increased for appealing is ridiculous in my eyes, it gives more power to the haphazard retarded bullies at the FA, arguing one's case should not be a reason for extra punishment. It is yet another lazy piece of regulation from a dysfunctional and useless body that badly needs to be reformed for the good of the game
Posted by 1979gooner at 17:13

Us Arsenal fans need to stick behind Wenger as much as possible because it seems that the whole of this country is against him, managers, media, the FA. In regard to what you said about tackles the FA wont act until a member of the england team gets seriously injured. ARSENAL TILL I DIE, we need to win something this season and shut all the haters up, Arsene Wengers acts with courtesy all the time, maybe he should be rude to the media like Fergie or skip match of the day

wenger's physical assault on steve bruce by the FA's standard

The Fa is a joke,period.When you see what Fergie gets away with you cant but wonder if there is an agenda on to punish Wenger. Having an overfussy fourth official dont exactly help his cause,the modern game is bereft of feelings and some time you just have to speak out against ineptitude like the one demonstrated by Phil Dowd.

http://www.youtube.com/watch?v=u4lMbSr2ZYk any one remember this ? Wenger and another forth official