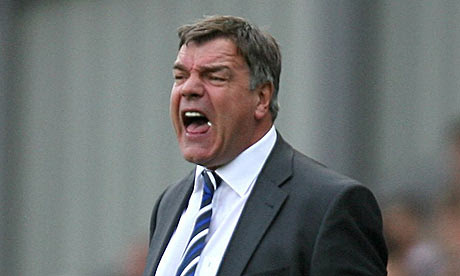 It's always tempting to react to Sam Allardyce's comments with aggression, anger and vitriol. However there's simply no point in getting angry, it's far more amusing to actually analyse the content of this fat walrus' words and systematically show that they are the bitter ravings of a very sad, paranoid and unpleasant individual. Sam seems to have a whole deep fat fryer full of chips on his shoulder:

"Read his interview before the Stoke City v Aston Villa match, what he said and how he said it - he's a very, very clever man in terms of influencing referees, officials and everybody in football. He can't be brought up for it because it's about another match - rather just before he plays us."
Arsene is either extremely clever and cynical with his comments, or he is just stating a few simple observations and the paranoid Sam is reading far too much into things. What is Arsene supposed to do when directly asked about a specific game by journalists? Arsene is perfectly entitled to his opinion and pointing out some clear fouls on another team's goalkeeper is a far throw from trying to influence referees. Sam then goes on to make some comments about tackling that demonstrate a complete lack of understanding of the rules of the game:

"He's deflecting attention from the situation which says the game of football is a contact sport. You have to try to win the ball at all costs and if someone doesn't get it quite right people get injured."
If Sam bothered to read Arsene in context, he has repeatedly stated his love for English football, he has never tried to turn football into a non contact sport, however what is clear is that the rules of football state quite clearly that it is serious foul play to put an opponent at risk of injury, even if the ball is won, maybe the fat repugnant one should read the FIFA rules of football again:

"A player is guilty of serious foul play if he uses excessive force or brutality
against an opponent when challenging for the ball when it is in play.

A tackle that endangers the safety of an opponent must be sanctioned as
serious foul play.

Any player who lunges at an opponent in challenging for the ball from the
front, from the side or from behind using one or both legs, with excessive force
and endangering the safety of an opponent is guilty of serious foul play."
Sam's 'at all costs' comment is not only wrong, it is both irresponsible and deeply reckless, arguably it could merit an FA charge in itself for bringing the game into disrepute. Sam does then go on to claim that his players would never be told to or go out to deliberately injure the opposition, this shows the meaninglessness of the word 'intent'. If one is told to go out and win the ball 'at all costs' then this is will inevitably result in serious foul play, which then will result in some needless serious injuries. 'At all costs' is almost tantamount to deliberately injuring the opposition on occasion.

Sam is once again showing his true colours. Not only is he showing that he is a thug of a manager, he is also showing that he has a massive chip on his shoulder, he has a clear record of trying to bully and intimidate referees for which he has been charged by the FA in the past and arguably these comments are yet more of the same. If Arsene has most of the media in his pocket, then Sam probably has most of the UK pie industry in his.

Allardyce has taken Arsene's quotes massively out of context and used them to serve his own agenda, that is his dire overly physical brand of 'football'. Interestingly there is no mention on anything specific from Allardyce, no comment on the Paul Robinson tackle, no comment on the FA's dysfunctional system, nothing of substance at all and nothing that addresses any of Arsene Wenger's specific points. He has just launched into a pathetic paranoid personal tirade, while his argument and logic disintegrates at just a glance. What a man Sam is, I wouldn't waste my sputum if given the chance.

Fat Sam to be next England Manager?

He'd have to display a modicum of good tactical awareness and a recognition of what a skillful player can achieve.

Best summed up by the two Toons a while back -"You don't know what you're doing!!"

Forgive him lord W he knows not what he says!

What a load of rubbish. If you seriously believe Wenger cares for the good of the game then you are a fool.

A couple of facts for you:

1. Arsene Wenger chose to highlight a referee's performance in a game (no one asked him about) with Stoke vs Tottenham, purely because he feared your own rubbish keeper would be targeted against Blackburn (managed by Sam). The ref allocated for your game was the same one. Coincidence? Don't be so naive.

2. When Arsenal were the dirtest team in leagu, did Arsenal call for more protection of players? Not once. Indeed he consistently stood up for his players in the same way Sam does of his own.

The funny thing is Arsenal fans have become so well educated on what merits a red card these days. You've suffered some bad injuries but what club hasn't? Just this week UTD and Fulham lost two players. Spurs lost two themselves. Not one enquiry into that?

I do not like to see other players injured and would be going on about these if they were as a result of reckless challenges.

Both were more bad luck that anything else, very different to the Paul Robinson tackle.

Anyway the point is not about whether the player gets injured, it's about outlawing extremely reckless jump challenges like Robinson's.

Arsenal have never been dirty under Wenger.

We used to get more cards but it was a rather dishonest tag from the media, they hyped up our red cards which were rather numerous at that stage, but most were for retaliation and due to a naivety.

Arsenal under Wenger have never been dirty in the true meaning of the word like an Allardyce/Hughes side.

By this dirty I mean, a team that has done out to systematically foul/cheat.

Even if Wenger did highlight this referee's performance purely by himself, he is entitled to do this, there were several blatant fouls on Gomez missed in that game. The Huth one being the prime example.

to pin you down on one point:

is it acceptable as Sam says, to go out to win the ball at all costs?

Anonymous: The difference is that that Arsenal team you called dirty were a footballing team, not a rag tag army of boby builders, faild boxers and bullies. The team competed favourably with the best and squezed the balls of the likes of Bolton and Blackburn who refused to play the game.

Anonymous is probably some 12 year old who looked at records rather than witnessed the Arsenal sides of the past.

Its amazing that people don't think before they write...how can a team be applauded world-wide for playing some of the best football AND be a dirty team. Doesn't add up does it?

We had players at the time who would not stand for the dirty tactics imposed on us by lower teams and players like Keown, Vieira and Petit were not ones to keep quiet. Name one Arsenal player out of all those listed to have been sent off who seriously injured the opponent.

Some thinking needed before you speak!

Anonymous;the fact that you are able to compare Valencia's injury,which was the result of him getting his studs caught in the turf and not a dangerous challenge which Aaron Ramsey,Eduardo and Diaby,from Dan Smith,sufferd from,makes me believe that you are in contention with Fat Sam for the most deluded penis of the prize.

"makes me believe that you are in contention with Fat Sam for the most deluded penis of the prize."

If your point was that you are childish, then definitely, mission accomplished.

The fact you are guys are so willing to dismiss your red cards as merely naivity suggests you guys don't really possess enough perspective to warrant a debate with you. Patrick Vieira once spat at an opponent. You don't call that dirty then you really should question your role in society. I have learned enough from your penis comment anyway.

'Naive' is a very valid way of describing a lot of them.

Naive because quite a few of our players were sent off for petty things and not seriously dangerous/violent play.

For example, little pushes in the chest, Petit daring to ask Durkin why? without even swearing at hime, little kick outs.

Actually look at our record, even when we were dirty as you say, we actually weren't top of the disciplinary bad boys table and we didn't actually have many yellow cards, hardly the sign of a dirty side is it? And a lot of the reds were for petty naive things, not wild leg breaking tackles that could maim opponents.

Spitting at someone who racially abuses you is hardly a great offence in my opinion. I'd much rather be flobbed at than have someone try to break by tibias.

I suspect the real reason for you not don't think this warrants a debate as you know it is a debate you will lose, because you do not have the facts, the rules or the evidence to back your argument up.

That is also why I suspect you will not answer the question, is it acceptable to try to win the ball 'at all costs'?

Anon,I consider you a penis as you were able to compare an incident where Valencia effectively broke his own leg with challenges that are wild and dangerous.Wiping a piece of spit off my shirt or being laid up in hospital for months worrying if you will ever play again...mmm tough one that...People like you make me phsically sick and you probrably fall into the same category as our ex player B.Marwood who commentated on Setenta just after Diaby had his ankle broken and disclocated by that git Dan Smith,that "The Arsenal players are all standing around moaning and it is a mans' game"...he is a penis and probrably sleeps in the same vegetable patch as you.

Anon 5 hours have passed and still nothing on your defence of "at all costs"...as they say seen off,goodnight

indeed, Anon is a c*nt of the highest order