The FA's inconsistency and lies 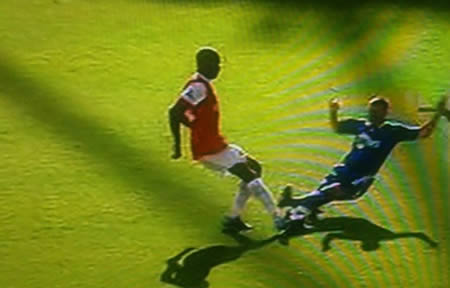 One doesn't have to look far on the Internet to find countless examples of problems with the FA's useless disciplinary system. High profile examples include Gerrard's missed elbow (Stuart Attwell again!), Mascherano's missed elbow, the RVP and Adebayor exchanges, the Ashley Cole tackle on Alan Hutton, RVN's punching of Freddie Ljungberg and on and on ad infinitum. It has been clear that their disciplinary system has been failing for years.

The fact that the most violent conduct on the field is being dealt with in such an incoherent, inconsistent and frankly haphazard way is not only unfair but it puts players at a greater risk of sustaining serious injuries, as violent play is slipping through the FA's net time and time and time again. The FA's logic to justify the fact that no retrospective charge has been administered is that the 'referee saw and dealt with the incident at the time'. The FA claim that they cannot ever re-referee matches:

"The referee saw the incident and dealt with it. We cannot re-referee matches....The player was shown a yellow card at the time and the decision is not then looked at retrospectively."
However they have not always done this, for example they set a precedent in 2006 by upgrading a booking and suspending Ben Thatcher following his challenge on Pedro Mendes in a game between Manchester City and Portsmouth in August 2006. The justification of this was particularly woolly:

"The reason why Ben Thatcher was charged in addition was because, even if he had been sent off by the referee Dermot Gallagher, we would still have charged him on top...That was the rationale we used to charge him with violent conduct."
Under Fifa regulations, a decision taken by a referee can only be rectified by a disciplinary committee if the referee sends off the wrong player, or makes an obvious and serious error. Failing to send off someone for a leg breaking tackle or a deliberate elbow to the head would seem like both obvious and serious errors to me, thus surely referees could be rectified in these cases? UEFA have also charged players in the past for incidents that were seen by the referee.

To me it is clear that the FA have the power to charge whoever they want retrospectively, it is quit clear because they have done it in the past, they have set the precedent. This even applies if the referee saw the incident and punished it at the time. However sometimes they claim they cannot do this because they are hamstrung by the rules, this is untrue, if they want to they can, it just comes down to a subjective judgement. Where there's a will there's a way and it's abundantly clear to me that the FA do not have the will to stamp out the most violent and reckless play from the game, and that is not only sad, it is an utter disgrace.

Paul Robinson's tackle and Steven Gerrard's elbow were both serious and obvious refereeing errors from Stuart Attwell. The fact that they have both been let slide speaks volume about the FA's lack of desire to stamp out violent play, they could easily charge these players if they so wished. It is time football got with the times and introduced video technology to assist referees, the idea of a rugby style citing system after games would also have the potential to cut down violence in the game massively. Diaby was maimed by Dan Smith and the FA did nothing, Diaby has now been assaulted by Paul Robinson and the FA are doing nothing again, how many more violent acts must we see go unpunished?
Posted by 1979gooner at 09:45

I sent an email to the FA about this - I'm still waiting for a reply.

It may be the the football ombudsman is the only way to go.

I think you're wrong about this. The FA are quite consistent in their application of the rules. It is imperative that a panel in some back room doesn't supplant match officials. To start with I wouldn't want club acquiring lawyers and filing frivolous claim after frivolous claims because they can successfully bamboozle an FA panel to get them to award them an advantage.

It's important for referees decisions to be final. As someone who's refereed, I'd absolutely have hated it if there

I sent an email to the premier league and was given an email address for the FA, so forwarded it to them too.

Lert you know what happens fella.

I sent an email to FA last year after Aaron Ramsey's injury and was told "football is a physical game, little lady - go away"
If any other work place involved these type and number of violent incidents and career threatening injuries, change would be forced on them. Perhaps it would be better to report the FA to the H&S executive for not taking it's responsibilities to players seriously.

I disagree and I have made it quite clear how the FA have broken their own 'rules' in the past when it has suited them.

It's rubbish to say that referees shouldn't be undermined or their decision shouldn't be final, this argument is actually quite nonsensical when you dismantle it under a microscope.

It is more important that players are protected and that the rules are applied consistently.

I'm afraid that there are many other professions, such as law/medicine etc, in which very important decisions are made (far more important than football), they can always be criticised or appealed by due process. The lawyer or doctor doesn't have to have a decision that is final and that can never be over ruled when clearly wrong!

Football is stuck in the dark ages on this one, the same lame duck argument that error is part of the game is another example of this flawed thinking.

If a decent process was put into place that used technology to help referees before and after games, and this process meant less mistakes were made for the better of the player's health and for the good of the game, then I'm sure the vast majority, inc refs, would be behind it.

There will always be a minority of fools standing in the way of progress, saying things should be that way because they have always be that way.

If we listened to that minority we'd probably still be breeding with our sisters and living in mud huts, stoning witches and torching homosexuals.

Thanks so much for the post, pretty helpful information.

I just can't stop laughing because he is injured because of his fault or others. Really, he is going to miss some matches in this Barclays Premier League season although scored 2 goals for Arsenal