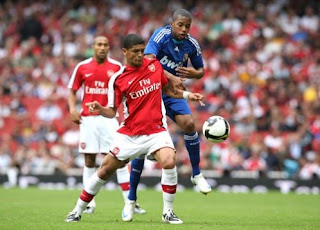 It looks increasingly likely that AW is going to back Denilson to partner Cesc in midfield against FC Twente on Wednesday. With Diaby out injured and Song at the Olympics, the only other choices for the central role would seem to be Eboue or Ramsey, judging by AW's pre-season selections.

The consensus is that the Cesc/Denilson pairing is not likely to work as they are too similar in their playing style. I'm not sure that is right as Denilson seems to have developed some discipline in his game that was previously lacking. If he can keep things solid and simple, he could do very well behind Cesc, with the ability to to join the attack more than Flamini could.

However, with Cesc just back from his holidays, I'm sure that AW would like to limit Cesc's involvement in the FC Twente game. The absence of Rosicky, who could probably play in the middle as cover, is therefore another reason to worry.

I have been a stalwart of the "we don't need to sign anyone" camp for most of the summer, which was largely based on my expectation that Gilberto would start the season as first choice alongside Cesc. The kids would then fight it out with him to claim the starting shirt based on merit. It all looked good. However, the fact that Gilberto has gone means I am now rapidly changing my tune. I think we are going to miss Gilberto a great deal and its hard to understand why he was allowed to leave.

AW has effectively now gambled everything on Denilson. If the young Brazilian underperforms or gets injured in August, our season might be over before it even starts. And so might AW's. A bad start will see the press pointing the finger in one direction and the calls for Wenger's head will be made loudly. Every dropped point will be seen as the title being lost and if we drop enough points, then who knows what will happen.

Well sod it. It takes balls to decide to back Denilson to perform rather than spending £15m on a Barry or Alonso, with no guarantee that either of them will ensure a flying start to the campaign. Spending money is the easy option. Backing young talent within the squad is far harder. Wenger has done this many times before - refusing to sign a striker when Anelka left, refusing to sign a midfielder when Petit or subsequently Vieira left, or when Ashley Cole left.

Its just not how he does things. In fact, Wenger's "big signings" have almost all been failures - Wiltord, Jeffers, Reyes, possibly Hleb. In fact, Henry is one of the only big money signings that has done really well. And he didn't cost a fortune. Still, most Gooners want AW to get the cheque book out again now big time. I don't think he will, or if he does, I don't expect him to go beyond the £10m mark.

Some thoughts to end with. Firstly, if we are out of the chase for the league before Christmas, Wenger knows the knives will be out. Secondly, Wenger knows exactly what he is doing and the risks we face. Lastly, blind optimism never fails. Trust Wenger.

Wenger's a wanker!!!!!!!!! its not his f-ing money, why dnt he spend we need to get rid of alumnia,sendros,and bendtner,as well as gallas. we need a gk plus a centre back who could partner toure,a centre midfielder who could partner cesc,a winger,(like overmars) and a striker,. everytime i watch bendtner he pisses me off,

agree with the fact that bendtner is crap!!!! hes a good championship player but not good enough for the PL especially not arsenal and his attitude stinks!!! still think we need a tough DM rather than denilson who seems too light and if we get this one signing id be happy with the team weight we definatley need someone to protect a very leaky central defence as although we are all hoping for a defender i dont see one coming in!!!

anon 05:06. you are wanker. gallas is one of our better defenders and bendtner will be quaility. we are more than adequate on the wings. all we need is a big DM to help out the defense and cover cesc. you have practically asked for a whole new team you moron

It's not as bad as some say, I agree with you, Denilson is a very different player to Cesc, I really disagree with those who think they are identikits.

The problem is with the likes of Diaby and Rosicky, if these guys are never going to stay fit, then maybe they should be kicked out, it means we either gamble on a thin squad or we need a massive squad to accomodate their injuries.

Even if Diaby stays fit I doubt his decision making is up to it anyways.

I don't understand the negativity about Bendtner. I hear it from more than one person occasionally. He appears to be quality to me. In fact, I think if he played as much as Adebayor, Bendtner would haul in 30 goals as well. Why do people think Bendtner is crap? I wonder, if he were English, would he be shown more patience and support by Arsenal fans like Walcott receives?

Blind optimism? why write a blog/article. Objectivity is a rare commodity in any media these days I guess.. Anyway, we'll probably buy soon and assuage some fans, but the youth policy has gotten out of hand. We'll likely do fine tonight, but if Denilson gets injured I guess we can put Fabianski in midfield, he's done well in preseason right?