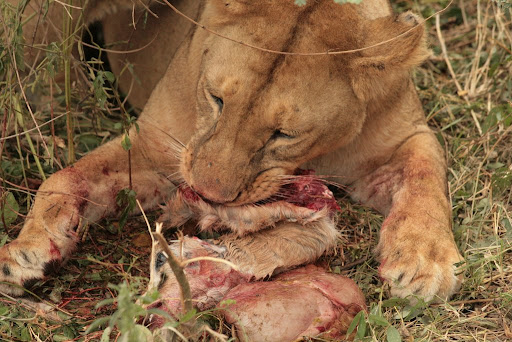 Having had a few hours to nurse my sore head, I have had time to reflect upon yesterday's terribly limp performance at Fulham; sometimes defeats are unfortunate and undeserved, however yesterday's was most definitely not one of these. I agree with everything Ted said earlier today, while Arseblogger also makes many similar points. Even given the poor performance we could easily have salvaged something from the game, several good chances still went begging and Fulham were lucky to go in at half time with eleven men still on the field.

The fact is that the team were not motivated from the off, there was no tempo, the pace of the game was both pedestrian and lethargic, there was no hunger. As a fan you want to see your team attack the opposition from the first whistle, like a Lion tearing apart a gazelle with a flesh ripping aggression. Yesterday's Arsenal performance had the tempo that one would imagine Kanu has when strolling out for the paper on a Sunday morning having smoked his first reefer of the day, it wasn't just laid back, it was bloody well horizontal.

The blame must be shared between the manager, the club captain and the players. Some tried hard and performed better than others, for example Toure, Clichy and Sagna were relatively impressive. Denilson is a talented kid who's not ready to boss a Premiership game on his own, Nasri was playing only his second game in the league, while Walcott still looks a little lightweight. Emmanuel Eboue did try his hardest but is eminently not a central midfielder. Song did add some real tempo when he came on, he surely must start against Twente.

William Gallas, now here is a man who has no excuses, he is our captain, he's massively experienced, anything less than 100% fight and commitment from him is substandard, and yesterday his performance raised massive question marks about both his ability to captain the side and to defend to a high standard. Gallas was consistently off the pace, weak in the air and not tight enough to his man, summed up by the appalling defending for the Fulham goal. We have a major problem with Gallas, as our club captain doesn't seem up to his centre back duties, let alone his job of motivating the troops. One feels that unless a big decision is made, this systemic malaise may well persist until Gallas is relieved of his duties. Letting Djorou leave in this context appears stupid.

RVP and Adebayor didn't do enough to justify their reputations. Forget the missed chances, even the best have bad days in front of goal, it was the lack of work ethic that was the most worrying aspect of it for me. It was not long ago that Ade was not only a striker, but an extra defender, he would never stop harassing the opposition, he would press and harangue til the cows came home. One simply cannot afford to have two egotistical forwards who cannot be bothered to work hard for the team when they are not in possession of the football.

There is a weakness in the midfield, even a blind man could see that we are too lightweight and inexperienced in this department, however the most worrying aspect of this game was the apathetic level of the performance, these eleven men should still have done far better against such an average Fulham side. This was not solely a midfield issue, there is a problem in the heart of our defence, our captain has lost the faith of his troops, we did not play and fight as a team. Big decisions need to be made and if they are not, one feels that the cracks will only get bigger.
Posted by 1979gooner at 12:29

it was sad. eboue, walcott, denilson and gallas should just not be starting any games this season. forget experience then, just bring in more able players ffs. gallas looks like he's having an identity crisis out there. there have to be consequences for a performance like that.