A bit of nothing 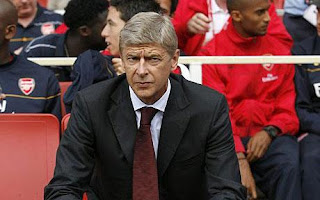 Its been a pretty dull week overall. The media hype on new signings has fizzled out, thankfully, and we have another pre-season mini-tournament to look forward to this weekend, starting with Ajax tonight and then Sevilla on Saturday. I can barely stand the excitement.

Perhaps one issue that AW will have to consider this weekend is how many of his stars really do need to risk injury. This comes on the back of news that Diaby is injured again, but I haven't seen any confirmation of the injury or how serious it is. That said, it did seem ironic that it was Diaby who injured Schneider last Sunday, causing a knee injury that will put the Dutchman out for several months. It wasn't the best challenge in the world and I reckon we would have been furious if the roles had been reversed.

Anyway, on other news, AW has confirmed Billy Gallas will be captain, at least for now: "So I think he deserves another go, to show his commitment. And then we will see where we stand at the end of the season." That is a pretty thin endorsement if ever I saw one.

Also, on the topic of the Olympics, AW has questioned why Barca challenged the Fifa "understanding" reached with the clubs to release players for the Olympics: “Everybody comes back or nobody. It is quite simple,” said Wenger. “I couldn’t understand why the rule is for three [players] and not for 23, for example. Am I angry? No. Frustrated? Yes. "

I tend to agree. As soon as the news broke yesterday that Barca has won the ruling that Messi was not obliged to go to the Olympics, I heard Scouse fans calling for Benitez to recall Macherano and Babel as well. I can see their point now that Gerrard is injured, but it would be a huge step backwards in the club v country debate if it happens. It would also be grossly unfair on the rest of the clubs who respect the understanding reached with Fifa on this. I don't think Benitez would do it, but the FA should step in if he does.

Agreed on the Olympics issue, but I don't see how we are going to win anything this season unless The Song is back in an Arsenal shirt and on the pitch doing his playing-and-moving-very-slowly-as-if-I-am-off-my-head-on-grade-A-ganja act. Best player in the universe. Truly he is.

That's Mr Song Billong to you.

They could all be inbred halfwits though.