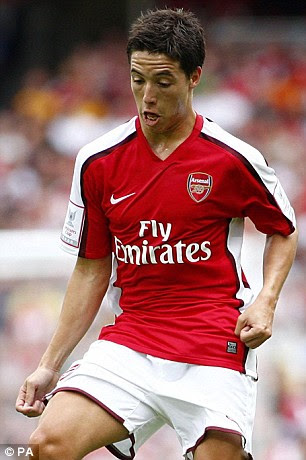 There has been far more chatter than action this close season. I can't say I'm particulartly happy or dissappointed at what has happened over the last few months. Exchanging the unproductive Hleb for the promising Nasri was a great piece of business. However losing Flamini, letting Gilberto go and having no real experienced back up in the centre of the park has not filled me with glee.

Emmanuel Eboue still looks like playing quite a few games in our midfield despite his remarkable lack of awareness, brilliantly summed up by Goodplaya here. Several young gems look like breaking through this year, Walcott has been brewing for a while, and others like Denilson, Ramsey, Wilshere, Bendtner, Vela and Song appear on the verge.

The season promises much, Arseblogger and Goodplaya have their own ideas of what is to come, while ACLF touches on something that I think will be rather crucial, we need to be able to win dirty.

If our whole first team sustain unfortunate ankle fracture dislocations then there is simply not much we can do about it, sometimes one is kippered by the Gods. However you do make a certain percentage of your own luck, and if we do our best in this regard then this may just be our season.

Winning dirty means keeping clean sheets when the football isn't flowing, it means not conceding sloppy opening goals to the weaker sides in the division, it means grinding out three points on a bog of a pitch somewhere up north where the Queen's english is not understood by the natives.

Whatever happens this season, we should all get behind our players and manager, and give them our backing so that they can have as good a chance possible of pipping the Chavs and the Mancs to the title. Adebayor may not be the most loved Arsenal player at the moment, however he'd have to be caught cottaging in a Tottenham shirt for his slurried reputation to be anyway near that of an Ashley Cole or Wayne Rooney. There are idiots and there are c*nts after all. Come on you gunners.
Posted by 1979gooner at 21:00

Arsene swears in a press conference - Bring it on you motherbitches.

If even Arsene is up for it, then the players must have picked this up. Eboue will be set to berserker mode today.