Great to see Aaron back 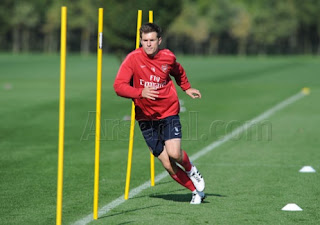 It is just about eight months since Aaron Ramsey suffered his leg break against Stoke City, or should I say had his leg snapped by Ryan Shawcross' reckless late tackle. It is fantastic to see pictures of him back in training, it will be even better to see him back in competitive action. It is rumoured that he may return for the Reserves in November, meaning a first team date is most realistically going to be December time. It is worth remembering Shawcross' pathetic words after the incident:

"There was absolutely no malice in the challenge. I would never, ever go out to hurt a fellow professional."

There was malice in the challenge, there was excessive force which is by itself malicious, this equates to going out to hurt one's fellow professional. Enough on Shawcross, he's not worth any more comment than that.

Obviously Aaron's rehabilitation is being closely supervised by the Arsenal medical team, they will know well that he needs to be go fairly slowly after such a serious injury. Fortunately his injury was a distance above the ankle joint, meaning it is less likely to have niggling long term implications.

The main bone he broke, the tibia, does need to build up its strength and this is something that cannot be rushed. Bone strengthens and remodels in proportion to the stresses applied across it, this means that the rehab process must be fairly gradual and staged, it can take many months before the bone is a strong as it is going to get. There is no point in taking any chances, it is much better for him to take his time than to rush back and risk a run of niggling injuries.

There is some interesting stuff on the Arsenal site today, I found the article on Jack Wilshere's tactical thoughts very relevant. I have commented on our tactical naivety several times in the last five years or so, we are suckers for being beaten by good counter attacking play, while we have lost a bit of killer instinct on the counter ourselves. Part of this has been our lack of ability to defend and absorb pressure, while the rest of it has been down to a tactical naivety and a lack of pace in the side at times. We will never win the league while we are unable to grind out results, the way we continue to leak goals is quite alarming.

Finally the Peter Storey interview is worth listening to, his comments on tackling are very salient. His words which state 'players just don't know how to tackle properly' are very true. The art of tackling is sometimes forgotten by certain thugs in our league, there is a way to safely tackle firmly and fairly. Certain players need reminding of this, as do certain referees, as do our completely limp and incompetent FA who simply can't be bothered to do a thing about the negligent snapping of limbs.

Almost the forgotten midfielder since his injury. Was just coming into himself when the horror of ryan shawcross hit him. Cant wait to see him back on the pitch!

I love the fact that he is almost back and I hope he shines and does not have that horrible tackle in the back of his mind every time he goes for a ball.

This is another arsenal blog, if you do not mind adding it