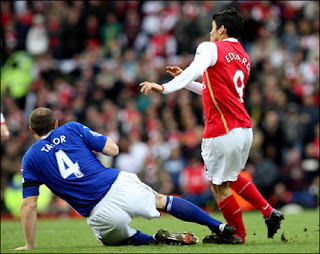 Arsene has reiterated some excellent points on the hot topic of dangerous tackling. His mention of the spate of serious injuries from dangerous tackles was an expertly aimed dig at those who claim that all these injuries are just accidents caused by committed play:

“What do you think? That all the injuries are coincidence? It's not God who tackles people, it's players."
Players like De Jong and Shawcross need to take some responsibility for their actions, it is no coincidence that certain players are routinely injuring their opponents with such regularity. Arsene's frustration with the FA and the corrupt power structures in England is obvious:

"I cannot influence what happens in England so I shut my mouth."
Finally the fact that other countries such as France deal with dangerous play strictly and properly was made rather clear, and rightly so.

"We have to make sure that the players know when they go into the game that if they do something that the referee has not seen that is dirty they can get punished....That happens in some other countries like France. You can be punished in France. A dirty tackle that the referee has not seen - you're punished. Even if the referee has seen the tackle and it's not punished you can still be punished. You can get six months."
The current situation is a joke. Dangerous tackles are being missed and ignored by referees. This means that there is simply no proper disincentive to breaking legs, it is propagating a culture of violence and needless aggression. This system failure comes down to one body, the FA, and their complete inaction is an absolute disgrace. The FA think leg breaking tackles are just a 'normal' part of the game, they have the power to act retrospectively on dangerous play but they continue to stick their bloated heads in the sand. No wonder they're called the FA when they continue to do absolutely f*ck all of use.
Posted by 1979gooner at 10:53

I think we need a Rugby style citing panel. Even if the ref see's something, the manager can cite a player for dangerous play and I also think bans should go fro 5 games to 20 games, depending on the case.