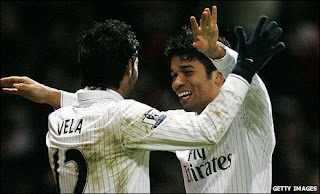 As predicted there were a few changes to the starting eleven. Fabiasnki in for Almunia, Silvestre in for Traore, Merida for Diaby, Vela for Arshavin and Wilshere for Nasri. Overall the first half was very bitty indeed, a typical blustering cup tie if ever there was. The ref Clattenberg who looks like a prime tosser to me with his primadonna hair cut never got control of the game, allowing far too much shirt tugging and fouling from behind when players were simply not in a position to make a fair challenge for the ball. This was summed up for me in the second half when the niggling Diamanti took Vela's shirt off his back and then kicked him down from behind without receiving so much as a warning.

Having said that we never got going and West Ham turned the game into a battle which they progressively dominated. It had nil nil written all over it until Diamanti slotted home when clean through. Diamanti and Nouble were both just offside but the lino ignored this (as replays clearly demonstrated), Silvestre may have been to blame but this is harsh given that the offside trap did technically play Diamanti offside. There had been a few half chances up until that point, Eduardo forcing a decent save from Green, Vermaelen blazing over when the goal was at his mercy following a limp Green punch out, Fabianski had also saved well from a Diamanti cross cum shot. It was just a bit frustrating overall because we seemed to have a few opportunities to break but there just wasn't the precision needed in the final third, we were also taking too much time on the ball in the midfield. The second half was calling for more crispness and speed in the build up play.

The second half continued in a similar fashion until the introduction of Nasri and Diaby at its mid point. Of note Fabianski made one outstanding save from Stanislas, after Silvestre had been caught napping yet again. Wilshere and Merida both made way, both had been a little disappointing in truth, though in their defence it was a very hard game to come into, especially considering the fact that it was a midfield and forward line that had probably never played together before. A large factor in our ascendancy as the game wore on was the fact that West Ham could simply not maintain the tempo of their nut busting hectic hurtling game plan.

Eduardo looked more at home in the middle, while Vela seemed to enjoy his spell hugging the touchline. This combined with Diaby's forward running and Nasri's cuteness on the ball meant that things began to click. Vela gave us a bit more width, our midfielders were suddenly getting to things first and the pressure slowly built. Diaby and Song forced an excellent double save from Green, this was the start of the bombardment.

The crucial goal came with about fifteen minutes to go, Nasri distributed and ball back towards the left side of the box via Song, the ball then kindly broke to Ramsey via Vela who did the rest with aplomb, a cracking left foot hit. The second goal was an oustanding header from the natural predator Eduardo, he used his strength magnificently, holding off Upson to loop a fantastic header into the top corner, credit must also go to Vela for the pacey whipped in cross. We continued to push for another goal, Eduardo was close with a header, Ramsey forced another last ditch Green block, Vela also went close. West Ham were a spent force, they didn't have the energy to threaten our goal again, the game had been won by a smidgeon of fortune and a brilliant header.

A lot of credit must go to West Ham for making us fight every inch of the way to our victory, they made things difficult for us and our slightly makeshift eleven was found a little wanting in adapting their game to combat this bustling approach. Fabainski and three of our back four were excellent. Our starting midfield and forward line did not quite have the right mix with which to deal with the West Ham game plan, although with West Ham running out of steam it was as nice time for Diaby and Nasri to emerge. Wilshere showed glimpses of his ability but he does look like he would greatly benefit from more gametime elsewhere on loan.

It was almost slightly strange how the game suddenly swung our way, maybe if West Ham had had a bit more quality up front they could have climbed out of reach, who knows. For me I would conclude that the mix of our squad is not right in terms of midfielders, forget the talk of strikers for a minute, we needed someone alongside Song today who would take any prisoners, Ramsey and Merida together was not the right combination. With Song off for about four weeks this will become even more obvious, I hope I am wrong but that's not what my gut is saying.