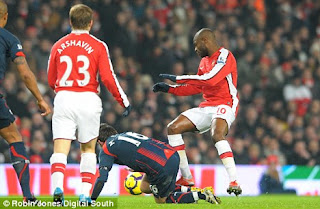 Firstly at least one person from Bolton, Owen Coyle their manager, has seen sense and realised that his initial words were over the top regarding the Gallas tackle. The clear media bias can be seen in this Star article as the tackle is called a 'horror' tackle. In reality it was just a foul with studs up and nothing more sensational, as can be seen on video and from the photo above Gallas had his leg bent when he made contact, he did throw his body weight into the tackle, he quickly changed direction and got on with the game, it was just a mistimed clip with the studs up. It is unfortunate that Davies was injured as a result but we see a lot of yellow cards given every week for tackles that are far worse, Robinson's on Sunday for example. The reaction from certain sections of the media and some Bolton supporters has been both hysterical and inconsistent.
Arsene has acted very objectively whilst many around him have been throwing toys around and wetting the nappies that they should have overgrown by now. The Sun has today picked up on Arsene's words and shown the clear malice that was present in Taylor's off the ball efforts on Cesc Fabregas. If the ref could see this on video then I am sure most would have given Taylor a red card, poetic justice was far away though, Taylor was rather happy when he celebrated his penatly at 2-0 on Wednesday, maybe the thug should have saved his gloating for the final whistle. Arsene has also quite rightly nailed Sky for their gutter standards in 'brainwashing' viewers with their lazy sensationalist journalism.
Sky have a long history of highlighting the innocuous while ignoring the much less innocuous. One example of this I could never forget is a Van Nistelrooy off the ball right hook into Freddy Ljungerg's stomach, it was caught on camera and ignored. Sky's intellectually challenged pundits like Andy Gray and Jamie Redknapp are clearly not objective in their analysis of events, they will ignore leg breaking tackles if carried out on teams and players that they do not like, while if Sir Wayne Rooney or Sir Steven Gerrard jump in two footed then it is nothing but a good firm tackle. The hysteria created over Eduardo's dive was utterly ridiculous and was typical of this media brainwashing, an even more blatant dive by Darren Fletcher which the ref punished with a yellow card a few weeks later was completely ignored by our noble objective media.
The Mail's headline "Angry Arsene Wenger hits out: You are all out to get Arsenal!" gives their agenda away, rather than actually looking at their very own slack journalistic standards and useless sensationalist gutter standards, they try to make a joke out of it by portraying Arsene as a paranoid fool. The Guardian covers things in typically more objective fashion, at least not all papers and TV channels rely upon appealing to the lowest common denominator to sell their wares. Some Bolton fans continue to amuse me with their tear jerking whining, a particularly bright spark thought publishing an article entitled ' a visit to the grubbiest club in football' would not create a few rather angry responses. I think this author would do well to refrain from call Arsenal fans 'cerebrally challenged riff-raff ' and 'mentally disadvantaged', it is obviously not going to encourage a reasoned debate. This author clearly realised he cannot win this argument with objective reason, he would rather stir up hatred with his puerile insults, a bit sad really.
The way the media condone teams deliberately fouling and injuring Arsenal players in order to beat them while criticising Arsenal players for relatively mild foul tackles shows their rank bias and hypocrisy. Ricardo Fuller's words in the Star demonstrate this point very nicely for Arsene. I remember the media were strangely quiet last year when Stoke put three of our players out injured with bad tackles, the one on Adebayor by Shawcross was a clear red card tackle and made Gallas' look like a kiss on the cheek. This was probably just good old 'English play' I'd imagine, if we were to do the same to anyone it would be 'dirty Arsenal' cheating their way to victory.
Anyway away from the hysterical nonsense and onto the business that is Stoke away on Sunday. Stoke are struggling to score goals this season and if we can defend the aerial balls well then I think we will come away with a result. It seems that Eastmond or Coquelin will replace Sagna who has a dodgy shoulder. I'd guess that Fabianski will play in goal, Traore may give Clichy a break as he has only just returned from injury, we may see Silvestre and Bartley at centre back. Injuries and absentees (Song, Diaby, Ramsey, Nasri) may well force Arsene's hand in midfield, Denilson, Eastmond and a.n.other might well make up the three. Then I'd chance my hand that Vela, Eduardo and Walcott will play up top. Given our injuries and the number of key games we have coming up I think Arsene has no choice but to rest the key players, it will be a big test for the young lads though. Elsewhere William Gallas' contract talks are going well, Big Phil is set to join Everton on loan (does anyone know when his contract runs out by the way?) and Bolton fans are still indulging in a lot of hypocritical whining.
Posted by 1979gooner at 09:42

I quite agree with your comments about the media and how opposition fans can't wait to jump on the bandwagon with their "same old Arsenal, always cheating" nonsense. Sure we've had some players that have dived and made some ify tackles but no more than anyone else. And the bitching coming from Bolton has been astonishing. I saw the vital Bolton fool's article. Given that we are top of the fair play league I think the aforementioned sky pundits and gutter press should try to be more balanced in their opinions.

The Vital Bolton's stuff is just like Sky and the Daily Mail.

It is rubbish written to attract more viewers by being stupidly sensationalist.

Not all publicity is good publicity, for example making the front pages by running naked at the Prime Minister would make one rather well known, but it would not be a great thing to do for you best long term interests.

What is incredible is just how many idiots take what is on Sky, in the Sun and the Mail, at face value without engaging their brains and thinking to question the mindless rubbish.

A lot of idiots like to read what they want to hear, it's a sad human trait.

People like to forget this, but people like to sink to the lowest common denominator, fascists like Hitler can become very popular by doing exactly this.

It is not big and clever to follow what you want to hear, it takes balls and intelligence to question your own prejudice, shame most people aren't up to it.

Sorry I've not read the whole article, but I think Arsenal can take this whole bollock media sensationalism in a very positive light. Now opposing teams will not say that we are a bunch of kinds and softies, will they? Cheers to Gallas, no offense meant to Bolton, but "hello" take it like a man; you take as much as you give! So, once again, Cheers!

As a non-English person, I am shocked at the bigotry of the English. I live in South Africa and I'm black so I'm used to racial hatred. But it also means that one is sort of tuned in to it. What's happening to Arsenal is just shocking. I've seen Fabregas kicked in the head, have his hair pulled, players standing on his neck, repeatedly fouled, abused by journalists, etc. over the last 3 years. Vieira also suffered incredible abuse and injustice. Every week when I watch Man U or Liverpool, Rooney and Gerrard dive, without fail. But no one mentions it. Those two are actually the biggest divers in the EPL but they are English.

How can what Bolton and Stoke and Blackburn do be considered good for football? Why isn't anyone surprised that the English national team is such rubbish? It's because of the rubbish football that English players are encouraged to play. In Spain, even when Malaga play Madrid, they try to outplay or out-think them, not kick them to bits. That's why even a game between Malaga and Xerez is absolutely watchable. But no game in the EPL that does not involve the top 6 is watchable and hardly any team outside of the top 6 has a decent player.

All this is really sad to see because many around the world have a soft spot for English football for historical reasons. But the debt issues, insane Arab and Russian owners and the horror football of many of the teams leaves a sour taste.

I could not agree more.

The point you make about the likes of Bolton and Stoke being damaging for the quality of English football is so very true and one that is not made at all in our domestic media.

The problem is that in a footballing culture that allows routine over physical football and cynical aggressive fouling/injuring against the better technical footballing sides, the technical creative player dies at the expense of aggresive thugs with no skill.

No wonder we lack a Fagregas type in the England side.

The media prefers to blame foreigners for this problem and not the Boltons/Stokes of this world.

Below is a very close approximation of the actual snippet of conversation I caught between Adrian Durham & Steve Staunton on Talkshite Radio around 7pm on Wednesday evening to round off their drive-time show:

...& doesn't that just sum up everything perverse & contradictory situation where it's acceptable to boot, stamp & punch Arsenal all over the pitch then hammer Arsenal for even the most minor incident

Should, that should have read '...everything about the current perverse...'

I missed the game on wednesday and have only seen the Gallas incident on replays, over and over again since on TV.

Sky's soccer saturday spent fully the first 15 mins of the show talking about it.

Its a classic case of the tackle only being made because the Bolton player was so desperate to get the ball. It was not Gallas who went to ground, they both had studs up, but Gallas got there a fraction of a second later.

Its just bad luck. Gallas' tackle really was not that bad.

Perhaps we had this coming for bleating too much when we suffer slightly at the hands of opposition 'bad tackles', but maybe this also shows that we can match physical northern cloggers like Bolton.

Gallas' silence on the subject is sensible. We should not even give fuel to the idea that it might have been a deliberate foul.

Lastly, there is the added bonus that we can build a siege mentality in the dressing room - its the world against us so get ready to fight for your lives.

So this anti-arsenal hysteria might actually be just what we need!

indeed, a bit of a siege mentality is a good thing

talk-sport is even more sensationalist that Sky, it is the true gutter and is often overtly racist in the opinions that are expressed by punits and listeners