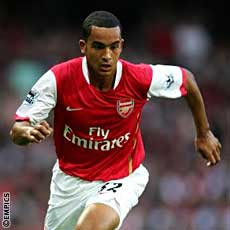 The early rumours surfacing on Tuesday are that Theo Walcott is expected to be fit to play against Manure on Saturday, and that Bacary Sagna is tipped to be available tomorrow against Fenerbahce.
At last some good news, I hear you cry. Although Adebayor is almost certainly out of both games. To go into the Manure game without RVP and Adebayor is a real blow.
Tomorrow nights' game against Fenerbahce is all about settling the nerves after recent disappointments. I am not a big fan of chopping and changing the team for these fixtures - by all means tinker round the edges but we need some consistency in terms of formations and tactics. Recently we have had the high line of defence up the pitch against Fenerbahce away, squad rotation against West Ham, the substitutions against Spurs and then a wholesale change of formation and tactics for Stoke. No wonder the players are struggling to keep up.
RVP will be eligible to play against Fenerbahce as his suspension does not count in Europe. So there will be no reason why he doesn't give everything in that game knowing he has a rest coming up.
The problem is who plays alongside him (actually there are lots of problems, that is just one of them). Nik Bendnter is the obvious choice but then he will play 3 times in 7 days if he also faces Manure - far too much for a relatively inexperienced lad at this level, especially if you are looking to rotate. The jury is also still out on Mr Bendnter. I for one have not been massively impressed by his performances so far this season.
Having scene what Walcott's pace can do to teams, I therefore would not be surprised to see Wenger switch to a 4-5-1 for at least one of the games this week . Bendnter could be rested against Fenerbahce to allow him to play up top against Manure. Diaby is the obvious candidate for the free role in the hole behind with Walcott and Nasri given licence to attack forwards from the wings. You could also play Eboue on the wing and push Walcott forwards to leave Diaby on the bench. Who knows - Wenger might even give Carlos Vela some time on the pitch.
Either way, success on Saturday is likely to depend on whether Bendnter can hold the ball up and lay it off to the advancing hordes of midfielders. If he can then we just might give the Mancs something to think about.
Posted by Ted at 12:18

The Utd game is going to be horrific.

We are not going to trouble them a bit. Rooney, Ronaldo, Tevez and Berbatov will be far too much for our back 4, especially with the minimal protection they get given by the midfield.

And a midfiled composed of central midfielders withouht much gass is going to be easy to contain.

I am having fears of another Stepanovs-esque humiliation. But this time it will be at home.

The Champions League game is a nothing. If we win - so what. If we lose - moral dips even further.

It is now that you realise how poorly equipped our squad is. We had a few fears pre-season, but grew to accept it in the hope players would step up and deliver. None have, and now it looks worse than even the Doomiest of Doomers could have doomed.

I guess "moral" or "morale" could both dip further if Van Persie's display was anything to go buy.
And given that Eboue will definitely be playing.

In fact I hope to God he is playing as he may be the most experienced winger we'll have on the pitch.

I think Eboue may be injured. So it'll be Diaby and Denilson on the wings, with Toure on as a winger in the 80th minute.

Or failing that we bring on Wilshere and Bischoff.

Oh god I am going to cry.