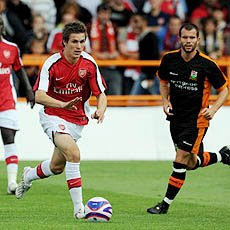 Its a difficult time for Arsenal and its hard to get the right perspective on last night's 0-0 draw with Fenerbahce at the Emirates. So, I'm going to start with some of the positives from the wider perspective and narrow it down from there. You will see that the results are alarming.

Arsenal's performance was the best from any English team in Europe this week. We outplayed Fenerbahce for 90 minutes and were far the better team. Compare that with Chelsea, who were woeful away at Roma and got thumped 3-1. The Scousers were also quite poor against Atletico Madrid and outrageously lucky to get (yet another) late penalty in front of the Kop to scrape a 1-1 draw. ManUre also underperformed against Celtic and had to rely on their usual late flourish to earn a point at 1-1. Celtic can also only dream of having a striker like Guiza playing for them. Fenerbahce are not a great side, but I think far too many Arsenal fans wrongly saw them as a walk-over. Aragones was heading for the sack last night if Fenerbahce lost, so its no wonder they fought hard for their draw.
Looking now at some of the individual performances, the mighty Arseblogger has rightly applauded Aaron Ramsey's performance. Well played Rambo - you look a class act and its a great testament that I would have preferred Cesc to go off and be rested so that you could have played the last 30 mins in the central role. Keep it up.
I would also like to praise Denilson's performance last night. His work rate was excellent and I lost count of the number of times he mopped up around Cesc's loose touches and made a pass. There is an enormous burden on his shoulders this year and last night was an indication that he can perform at this level. If Denilson had been signed for £15m over the Summer, people would have been raving about him this morning.
RVP was unlucky not to score, the back four had little to do but looked solid (Djourou to keep his place against Manure please). Cesc, Bendtner and Nasri were relatively quiet and ineffectual, so I won't dwell on them.
Perhaps the really positive spin is that Cesc has learned a trick or too from AW, whose cunning masterplan with the press was revealed this week to take pressure off the players by talking rubbish to the press. In a similar vein of genius, Cesc's half-steam, give-the-ball-away, head-down-and-look-depressed performance was actually a masterstroke to divert more attention away from the other players, to take even more pressure off them so they can really perform. What a clever quadruple bluff that is. (cracks in the positive spin are showing now. I certainly don't buy this clever double-bluff the media to help the players mumbo jumbo - AW got mugged by the press and Cesc needs to play far better than that against Manure.)
Right, back to the positive thinking. We kept a clean sheet, which is good. I don't think there are any new injuries to report (although Silvestre must be doubtful), which is also good, and we now have the rotated Diaby and Song fresh to unleash against Manure. (I am struggling to be positive now - what the **** is the point of rotating Diaby and Song? They have barely played this year. Cesc blatantly could have done with an early bath).
Its not clear yet whether either of Walcott or Eboue will be back for Saturday, but I expect Sagna to play, possibly allowing Toure to partner Djourou at centre back. Since that combination was the run-away winner in the blog-poll (top right), then I simply don't see any possibility than Manure can score a goal on Saturday, let alone actually win the game.
So its time for good old blind faith again. Strap yourselves in. Toure and Djourou will form the sort of defensive shield at the Emirates that we have not seen in London since the Spitfires downed the Luftwaffe. It will be a glorious celebration as Shrek-Rooney is felled by perfectly timed tackle after tackle, every long ball will be cannoned back by Johan towards Ferdinand's mutant head. At 0-0 and with seconds to play, the mighty Kolo will thunder in a free kick (RVP can't mess it up for him on Saturday) that goes straight through Van der Sar's hands, breaking each finger off at the knuckle, before smashing the net into ribbons. I simply can't wait.
So get up for it Arsefans. ManUre is a mere 48 hours away and as long as I have drawn breath, I have hated losing to those Manc bastards more than anything else on God's good earth. Draw on your own furies and sharpen your swords, because the team will need us on Saturday.
Posted by Ted at 09:50

Inspiring stuff.
Your obviously frustrated yet you look at the positives and are more analytical of any negatives rather than just staing them like many other bloggers,
Well DOne

Ted, I'm loving the anti Manre vibe mate. I can't wait for it.
Last night... Well I wasn't too pissed off, which for me is uncanny, as I only seem to go to the football so I can moan in the pub afterwards.
What really got my goat though, was the announcement from the awe inspiring pa geezer, saying that the attendence was over 60,000. What the fuck? There were loads of empty seats, how did they work that out? Do the dickheads just count the amount of season tickets and memberships sold at the beginning of the season and just claim they come to every game? Flumoxed I am.
Oh and the away fans were brilliant... So that was something else for me to moan about.

I want Aron Ramsey to play full 90 mins.....i m sure that guy will shine a lot

I'm still going for a horror-show on Saturday.

Or what might be even worse is that we actually play well, with a bit of passion and venom, but still lose.

Either way, I'll make as much noise as I can, make sure there is no booing of the Arsenal and make sure that each and every one of the Manc sgum goes back to their filthy chav-mansions with the words "fuck off you fucking cuntbutling bastard whore donkey-raping shit-eating cunt of all cunts" ringing in the vacuum between their two ears.

I agree with your take on the scapegoating of certain players,

Denilson hasn't been brilliant in evry game, however he has had some very good ones, however he's invariably taken a lot of the blame even when cesc has played like a drain,

the same goes for eboue, and also gallas, who have played very well at times and when they haven't they have taken the criticism that should have been directed more widely,

fingers crossed for manu, what;'s the chance that Rooney commits eight yellow card offences and doesn't get a single warning?