Arsenal 2-1 Manure. Tribute to the Faithful 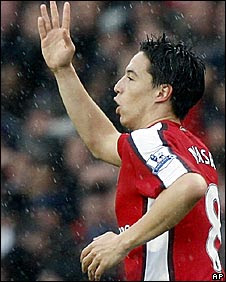 Wow. Where did that come from? Just goes to show that some of the old Arsenal spirit is alive and well in this young team.
Its not the time for too much analysis. That can come later. Instead, its time to sit back, open a cold one, and enjoy the warm glow of a thoroughly deserved three points against a virtually full strength ManUre team.
Make no mistake - this was an Arsenal performance of great vintage. Given no chance before the game, I suffered the shame of listening to 'Arsenal fans' on the train into London saying to one another that we were a mid-table side now and that today was all about damage limitation.
I can understand about people being depressed, but Arsenal have never dropped out of the top 4 under Arsene Wenger and the last time we were in serious danger of finishing 5th was in 2005 when we still had Henry, Vieira and Pires.
Anyway, the atmosphere in the Emirates was rocking. For once, it wasn't just Block 6 getting involved. The entire lower tier was standing for almost the entire game and in great voice. Well done the Gooners - it made a massive difference.
The game was about as open as I have ever seen between these two teams. Fergie did not flinch and played Berbatov, Rooney and Ronaldo from the off, throwing Tevez on for the last 20 minutes. For those who are constantly harping on about signing some players, those 4 players cost ManUre over £100m by my reckoning.  Whereas our back line of Sagna, Gallas, Silvestre and Clichy, which can't have cost more than £10m, where exceptionally good. The French Maginot line is alive and well. Even Gallas played well.
Nasri scored two great goals and will win the plaudits. Well done Sami - keep it up. But the star of the show was Denilson. I know I praised him after Fenerbahce, so this may sound like a bit of a mission, but I genuinely thought he was the best central midfielder on the pitch today. His work rate was excellent, he fought for every ball, he was disciplined in possession and used the ball sensibly.
This was a great result and we have to concentrate on using this as a springboard for the next 4 or 5 games. But for now, the Arsene Wenger Youth Experiment is back into the frame. In a week where I have heard more Arsenal fans than I care to think about genuinely question Arsene Wenger's future at the club, he could not have given a better response. Well done and thank you Arsene. As far as I'm concerned, its a job for life.
Posted by Ted at 17:31

I also liked what Diaby brought to the table. He did alot of nice things.

and Silvestre and Galls both played well which was nice.

Fab is definitely off his game, but because of his high standards, I think we can give him a pass on his form so far. Plus, on an off day, he still provided that final ball for Nasri. I wouldn't want any other midfielder in his place. Come on you Gunners!

Terrific blog.
I could not agree with you more about Denilson., He was aboslute class yesterday.
He had great accuracy, good ball retention and tackled.
He didnt get in the way of Fabregas.
Hopefully all the plastic fans who doubt Arsene will go back into their holes.

Lovely, shame to be out of the country. Managed to keep up to date by ringing a few people during the game, shame that it was at 7am time so nowhere was open to watch the game!

The point you make about cost is a great one, just look how our side has been assembled at such low relative cost.

Denilson has been great in some games and not so great in others, but overall he has exceeded expectations, who would expect a young inexperienced player like him to dominate and excel in every game in his first full season?

only idiots would have expected that, while cesc has played poorly at times but is never criticised because of his reputation,

you need a lot of patience if you are to see the fruits of developing these young players, so we need to continue being patient and the fruits will come

I Think Nasri, Diaby and Gallas were incredible yesterday. They All Seemed Very Comfortable and did you know that when Almunia Got injured Gallas had a word with every Arsenal Player. True Leadership! Really Pleased. Nasri's Second Goal was the product of a wonderful 15 pass move, if we're able to do it against United we can do it against any team. Denilson was good and although Fabregas wasn't quite at his best he did provide the assist for the 2nd goal. WOW! Wenger can stray for now in my view! =)