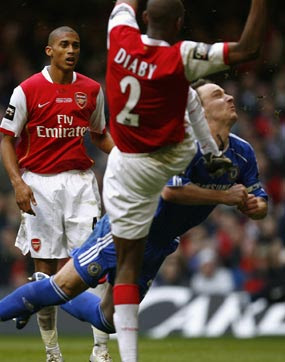 The banter has certainly begun with Alex Ferguson claiming Arsenal are in 'disarray', while Arsene has responded by refuting Fergie's words. One thing that is certainly true for the game this Sunday is that any result at all away to Chelsea would be seen as a great achievement, I really don't think we have much to lose, the main thing is that the players show some fight independent of the eventual outcome of the game.

There is some good news ahead of the game with Bacary Sagna and Samir Nasri likely to return, however it is likely that Diaby, Eboue and Toure will play no part. I would hope to see Johan Djourou partnering William Gallas at the back, however I know Arsene will persist with the pedestrian Silvestre. I know some people rate Silvestre, however I do not, maybe I'll be proven wrong, but for me Djourou is stronger, quicker and a better player.

There is definitely something missing from our midfield though at the moment and all of us know what it is. I see that some other bloggers also saw a certain Monsieur Flamini in action the other night at Pompey and realised what we are missing. It's hard to put into a single word but it includes 'fight', 'bite', 'tempo', 'gnarl', 'hustle' and 'snapping'. Alex Song is a decent squad player but he does not have the attributes necessary for the hustle and bustle of premiership midfield trench warfare, a couple of our other youngsters seem to have a bit more drive, the likes of Ramsey, Randall and Lansbury get up and down, while they also are not afraid of getting their foot in when needs be.

My line up for tomorrow would be: Almunia, Sagna, Gallas, Djourou, Clichy, Ramsey, Denilson, Cesc, Nasri, RVP, Adebayor. I would like to see Vela come on relatively soon if we need a bit for pace and directness up front, plus young Jack Wilshere is pushing harder and harder for a starting place. Realistically we can't win the league now, both because our results have not been good enough thus far but also because we do not have the players to do it, the two are inextricably linked. However any points picked up at the bridge will be a bonus and a great achievement. We shall have to make sure we cut out the sloppy errors in midfield, while we will have to defend much better as a team if we are to get anything out of the game, come on you Gunners.
Posted by 1979gooner at 13:06

What is it with everyone and bloody Ramsey??!!

The KID is 17yrs old, has played 2 or 3 competitive games, fades after 45 minutes and has hardly played spectacularly outside of teh Carling Cup. Dont get me wrong, I think he is a fantastic aquisition, but against the likes of Lampard and Ballack he will be eaten alive.

Its not fair to put him in that situation. I mean, he hardly played well the other night but you cant blame him he has barely been playing professional football for 1 year and only spent 3 months with Arsenal. Wenger needs an experienced midfeild in our own unfortunate way which means Denilson plays and so will Song.

Its so sad to see a once great team leave fans wondering whether to pick a Welsh 17yr old or an oaf called Song in midfeild. Ah well, lets just wait for the Wenger loyalists to come out and give me all the Wenger knows bullsh*t... ONE win in TWELVE against Chelsea tells me all Wenger knows over the last few seasons.

Titi what the fuck you call yourself a gooner???? Cut all this negative crap Arsenal is a fucking amazing club run the right way with dignity and doesnt whore itself to foreigners or gamble with its future. Wenger has constructed an amazingly talented team that will be one of the dominant forces in Europe for years to come for less than the Sunderland team cost to build. Everything he does is for the club. The amount of flak the man has been getting recently is a complete joke and is nearly always from people who have completely unrealistic expectations of what is possible in what is the most competitive league in the world and who, quite simply, underestimate just how good this team can be. It's about time people on these blogs started sticking up for the club and realising just how good they've got it - I thank my lucky stars every day to support such a great club as Arsenal and would rather die than associate myself with the kind of glory hunting prawn sandwich munchers at stamford bridge who think it is their right to win everything every year and who seem to be popping up on these 'Arsenal' blogs. TRUE GOONERS STICK BEHIND THEIR TEAM THROUGH THICK AND THIN. Why the fuck would you want to call one of your own players an 'oaf'?? Does it make you feel better cos you are not man enough to handle not winning every week? Try enduring a midfield of Hillier, Jensen, Ian Selley and Eddie Mcgoldrick which was what I was watching before Wenger came (though you probably have never heard of these people) then maybe, just maybe you'll have something to cry about

Super Selley!! I loved the boy Ian, I thought her was ace!
Nasri being back is a massive plus for the Gooners, he really is our ringer at the moment.
Anon is quite right, we need to get behind the team. I think Gooners in general although, not shouters or screamers, are some of the most loyal fans in Europe. We do support our team when the going gets tough. We just have to remind ourselves that the going hasn't got very tough for a long old time, and for this we should be very greatful.
I fancy us today, although I would start Bentdner and put RvP on the bench. I think RvP is a superior player, but if the score is 0-0 at half time an injection of dutch tenacity could be just the tonic.