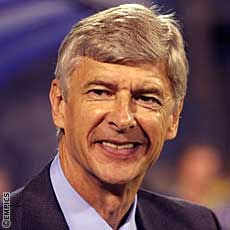 Arsene Wenger recently said this to the Arsenal's Supporters' Trust:
"I must say this year we had among the best attack but we have conceded 31 goals which is six or seven too many," he said. "It's as close as that to win the championship.
"We didn't give more goals away than any other team in the League on open play, nor on set pieces, but where we gave more goals away was on direct balls, in the air, through the middle, and most of the time on second balls.
"On set pieces and open play we were as good as Manchester United and Chelsea. The numbers are available. But we have to rectify how we deal with direct balls. When a team just goes for long, direct balls against us, we have to improve."

Its the usually sensible comments that Arsene is famous for. But he doesn't actually say anywhere that he wants to buy a centre-back. Nevertheless, and lets not let facts get in the way, that is how its been reported. Football 365 run it with the headline that "Arsene Wenger has confirmed that he is searching for a new centre-half". It may be the context of Ken Friar being busy on the phone gave the impression of lots of transfer activity this summer, but the quotes from Arsene don't actually say that at all. In fact, the Ken Friar bit didn't get quoted either.
Apparently its become gospel truth that Kolo Toure and William Gallas are now terrible players and we must sign someone else who is expensive. Immediately. Otherwise we will never win anything ever again and there will be blood on the streets of Islington.
Oh well. Its probably correct that if an excellent centre back was available for a decent price then we should try and get them. It would be nice but I doubt that's going to happen. Come what may, I'm more than happy to nail my colours to the mast and say that Kolo and Billy can work it out.
It appears though that Arsenal fans are now almost unanimous in their demands for a lot of money to be spent this summer. Theres no real consensus where it needs to be spent, but we all want the cheque book to come out big time. There were even a couple of morons at the Everton game chanting "no more kids, no more kids". Well go and watch Chelsea then.
Arsene Wenger has made his entire career based on spotting young talented footballers and playing them in the first XI when no one else would have dared. Any idiot can sign a player from Real Madrid for £30m. It takes unbelievable skill to spot a player at 16 and bring them through like he has done with people like Cesc Fabregas, Gael Clichy, Nic Anelka and Ashley Cole. Or to bring someone unknown from a foreign league like Bacary Sagna. The lists are endless.
Anyway. The cabin fever is clearly here to stay so its going to be a long summer of ranting for signings. Maybe clubs should run an X-Factor style contest to get some imbecile a contract with a bigger club. The morons would happily spend £5 a day each on phone votes to get Jimmy Bullard signed for ManUre ('parented' by Waren Barton in the Sharon Osborne role), or vote for David Bentley to go to Liverpool (you know its going to happen and you know it won't work). The Sun would love it.
Instead, if you actually read Arsene's quote, he just says that we were a bit shit against straight long balls. Yet again, it looks as if the so called football professor has been stealing his best lines from my posts again - its almost a quote from Nails and Stuff (shortly to be released in hardback). On the other hand, its patently obvious to anyone with eyes that we need to be better at dealing with straight long balls. But I reckon Arsene's a regular on AAB all the same.
I almost find it amusing that for all Arsenal's amazing football this season, the simple punt down the middle on the park has been our un-doing. There's no point in getting angry about it and I'm quite sure that anyone else we sign is going to make mistakes as well. We just need to think a bit more about our defending. We sorted ourselves out on set pieces and crosses, so why can't we deal with the long ball as well?
So, in other news, I am going to spend the summer writing a Myles Palmer style auto-biography about Me and Arsene. The blurb on the back cover will go something like this: "me and Arsene think along the same lines. I've never met Arsene but I always knew which substitutes he would bring on and when. Its spooky. Like we're twins or something. So I've written 300 pages of shite that you will regret buying......."
I'll put K-Man down for a pre-order of 10,000 copies.
Posted by Ted at 16:55

Looks like Ted is setting himself up for a summer full of ranting against any potential Arsenal buys - could be quite quiet then. Very few of us on this blog have said splash the cash willy nilly but 2 or 3 good signings wouldn't go amiss - if they happen to be cheap Sagna type signings then all the better. Have high hopes for Vela and Walcott but no I don't think Billy and Kolo will work it out - they've spent ages trying and haven't succeeded.

Sagna cost about £6 mil and no one knew him. Arsene knows.

It looks this morning like Hleb is off. Well fuck it then. There is absolutely no point is being loyal to players who want to leave.

We need new players everywhere. Ken Friar can cancel his holiday and get on the fucking phone. Sign everyone who is available. EVERYONE!

1979 - the votes thing has the following results so far:

thirdly great piece, enjoyed it, I have to say I've been getting this nagging feeling that the weakness from long balls is partly due to our smallness in midfield

I agree we're small in midfield. It is also somewhat surprising that given we have lost Diarra and Flamini this season, that few people are saying we need a new centre midfielder.

I guess it may be that if Arsene does buy some super duper centre back then Kolo and Song will be in contention to play the holding role in midfield?

Think Gilberto/Fabregas should be first choice in central midfield and there is already adequate back up with Diaby, Denilson, Song and Toure.

I won't miss Hleb much - 11 goals in 3 seasons is not much to miss and he rarely provides that many assists. He also slows down the game a lot. Vela and Walcott are quick players and I hope they get their chance.

I do think we need another winger though as Rosicky is so injury prone and Eboue hasn't really cut it this season.

I like that the media is totally panicking on our part - we'll be going bust within the next couple of weeks at this rate!

I had a look on the Le Grove website, and the panic on there is impressive. I do feel that people think "I support a big club, so I deserve to have big signings". Although generally this is simplistic, I am starting to agree. Whether we like it or not, the premiership is a big footballing circus that breathes, shits and pisses money. We spend a lot watching the team every week (and if we can in Europe) and I do want to see that money invested in the team, not on champagne enemas for Fat&Orange.

But the thing is, it can't go on - the way the footballing economy is built is very much in tune with the way people have viewed the housing market over the last 10 years "The good times are here to stay, so let's piss loads of money up the wall, as it'll be woth more ina years time". I think Arsene is banking on this not being the case, and that at some point the bubble will burst, fans will get bored (Keegan had a point but Sky has tried to paint him as an idiot) and the money will go. And lots of clubs will do a Leeds. Arsenal won't. But I do think that if we want short term success, we do need to spend and take some financial risks on the team.

Or we could just wait and see a bit longer, and hope the bubble bursts quickly.

Actually, 100% of what I just wrote is bullshit, so I am going to fuck off now.

I think you make a good point Obsinho. It was hard to see at the time in the late 1990's that Leeds would fall so fast or so hard. We should be careful not to follow their lead. Chelsea have been technically bankrupt for several years and if Abramovich goes then they are utterly fucked. ManUre and Liverpool are treading a risky line with their debt management, and will be in major problems if they have a bad season.

But that still means that in the short term we are unlikely/less likely than others to win something than our rivals (footballing and revenue wise). They will spend money and improve - we need to find a way to do it, and so far we are worse off than this time 2 weeks ago.

Wenger got close last season, but he has to do the same and more again. We need 4 Eduardos/Sagnas and 2 of Vela/Walcott/Merida/Baracite/Bendtner/Song/Traore/Randall/Gibbs to do a Flamini and step up a hell of a lot. I think it is a big, but not impossible ask.

Obsinho has a good point.

However I reckon we can bring in a couple of top quality experienced players in their mid twenties without buggering our wage structure.

As you say though there are a lot of muppets who have this almost childlike attitude of I pay for my ticket, so the club must spend all the money it can or else.

These cretins should grow a brain before speaking out. The club has done pretty well at managing its finances sensibly over the last few years and we need to take a step back and let Arsene and the club do their business without subjecting them to 'I pay I want' tirades.