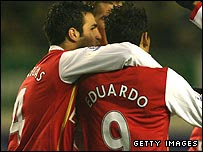 Most Gooners would have taken a point from today's tricky away fixture at Goodison park, I certainly would have,; so getting all three is a massive bonus, especially when man united failed so dismally at Upton park. In fact I would go so far as to say that today's win could be our best result of the season so far, just remember that Everton have been on an absolutely awesome run of form of late.

Wenger plumbed for 4-4-2 as many fans would have wanted, however it certainly didn't go to plan in the first half with Everton taking a deserved first half lead through Tim Cahill. Everton had a few other half chances and it appeared that the Arsenal players were pretty happy to get off the field at half time. It's worth mentioning that referee had an excellent game, not something I often claim, but he wasn't conned by some rather theatrical falls from Yakabu and Arteta.

There were signs at the end of the first half that things were beginning to click, and Eduardo's neat finish from Clichy's long ball completed the transformation as the confidence began to return to our play. Eduardo finished very tidily again to put us a goal ahead, he really has a great instinct in front of goal, reminiscent of Fowler in his prime in the way he gets the ball out of his feet quickly and shoots before the keeper has had a chance to blink. Bendtner then deservedly saw red for a dangerous tackle just before he was due to be substituted off. Everton crumbled and an embarrassing mix up at the back saw Adebayor left with the easiest of tap ins. Rosicky added a fourth after Arteta had been sent off for a flying elbow, as tempers flared again.

I just hope that today can be looked back on as a pivotal moment in this season's title race, we will need to carry on from here and keep on picking up three points week after week. Hopefully Eduardo can go from strength to strength now, and I'd imagine he'll start against West Ham on Tuesday. Bendtner has learnt an important lesson while our first half showing must act as a reminder that we have to be focused for every single minute of the ninety.

Football is only a game and Phil O'Donnell's sad death today after collapsing while captaining Motherwell serves as an ample reminder of this. RIP Phil and our thoughts are firmly with your family and friends tonight.
Posted by 1979gooner at 19:24