Moving on to Bucharest 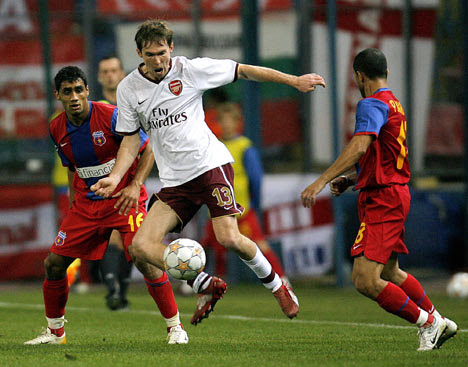 The dust has settled following the disappointing defeat away to Middlesbrough, and many different explanations have been offered since Sunday. Arsene was magnanimous in defeat agreeing that Arsenal deserved to lose, certainly this is a good way of motivating the troops who will be a little bit down in the dumps.

I am inclined to agree with the Adam Elder opinion, that Arsenal were pretty tired after several away games and that this was a significant factor. There were some brighter individual performances against Boro, from what I've read not everyone agrees with me here, but I reckon Rosicky has done pretty well in his last two outings in a team that has been well below par. Goodplaya points out how much we missed several key players. The result could be just the kick up the backside that is needed at this stage of the season, before several very tricky fixtures in December.

There were many reasons for our failure against Boro, and it probably doesn't serve much purpose to dwell on them for too long; however the combination of fatigue, the absence of key players, some below par performances from some big names, a well motivated Boro side, a poor referee and a dodgy penalty all contributed to our first defeat of the season.

It will be important to bounce back against Steau tomorrow, as two defeats on the trot would not be good for morale, especially with the visit of Chelsea looming. The good news is that RVP and Diaby are very close to returning to the starting eleven, with Flamini and Fabregas not too far behind them in that order. Jens is also set to start, it's a real chance for him to put some pressure on Almunia, a bit of competition could be good for both players. Hopefully Theo will get a start, and I would like to see Nicklas Bendtner get a start too so he can build on his recent promising performances. With so many tricky games to come over the festive season is such a short space of time, it would certainly be good to have a few selection headaches.
Posted by 1979gooner at 17:57

I know Arsene won't do it, but I would like to see the strongest eleven possible start tonight against Bucharest. Squad rotation is one thing, but I reckon consistency is more important to get the team ticking again.

Problem is, I don't know what the strongest eleven is. Does Diaby count as part of the "strongest eleven" at the moment? Its a "maybe" rather than a "yes". We have certainly missed his shooting from range recently, and I know that Eboue is generating criticism in some quarters, so maybe Diaby on the left with Rosicky on the right?

Up top, Ade the Togonator has to start if he is fit. Until RVP is back, he's the only striker we have with genuine experience at this level, rather than being a player with potential for the future.

Trouble is, who should play next to him? Bendtner and Walcott (Theo in particular) looked sharp against Boro when they came on.

Maybe one answer is that Theo could start on the right, leaving Rosicky on the left and with Bendtner and the Togonator up top? Or maybe, Theo starts up top....

Decisions, decisions. Being a manager is harder than it looks.....

Indeed, it's always much easier to point out fault than to do the job oneself.

Ade looked knackered to me, I would rest him.

I'd go for Theo and Bendtner up front.

I think Eboue has done well this season, apart from his poor behaviour against Boro, he has improved, although he does need to cut it out completely.

I'd go for Eboue on the right with Rosicky on the left, with Diarra and Diaby in the middle.

I think it's important to have Ade fresh for the weekend.