Incompetent officiating and a poor performance 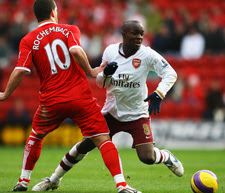 The line ups were as predicted and Boro began as expected, pressing and closing down eagerly. The game was turned on its head early on when Howard Webb presented Boro with a very generous gift, Aliadiere going over very easily when the ball had gone elsewhere, one nil down.

The rest of the first half was pretty uninspiring other than Howard Webb's rather incompetent officiating, an example of how not to referee if ever there was. Arsenal looked disjointed with too many sloppy long balls going astray, the midfield not looking its normal cohesive self and there was an ominous lack of movement. Eduardo looked short of confidence, while the midfield game lack any real tempo.
However it is made especially hard to come back when every time an Arsenal player beat a man and broke from midfield at the Boro back four, they are cynically stopped in their tracks. I counted at least five 'professional' fouls in dangerous positions that should have resulted in yellow cards, of these only O'Neil got a booking. Two clear Arsenal corners were given as goal kicks for no real reason, while Boro got a ridiculous free kick in a dangerous position when Gilberto cleanly won the ball. When cynical tactics like Boro's are allowed to prosper like this, one gets a clue as to why English football is not developing good technical talents with flair, there's no incentive to if you are cynically taken down each time a man is beaten.
Boro started the second half in lively form, two harsh bookings quickly followed from the inconsistent Webb. A lot of time wasting and some fairly disjointed football followed, Arsenal's midfield never got going and we never got on top of the game. Diarra and Gilberto do not seem to compliment each other particularly well. Boro scored a second as Tuncay followed up from a decent Almunia save and the game then looked over. There were a few positive glimpses from Theo, one incident in particular when he could have gone down in the box for a penalty, showing that he has more intergrity than Aliadiere. Bendtner looker sharp, but Adebayor had a poor game, gifting possession to the opposition on numerous occassions. Rosicky grabbed a consolation goal with a well worked second and that was that.
Overall an extremely frustrating ninety minutes. The soft penalty was exactly the start Boro were looking for, and our stuttering performance meant we never really looked like getting back into it. The midfield did not look right, there was just not enough pressure on the ball and not enough craft, with too many long balls gifting possession back to the opposition. Boro didn't deserve to win the game either in my opinion, they tried hard but didn't really create much clear cut. Small things do change games, and Howard Webb's particularly incompetent first half performance did swing things Boro's way. Having said that, we'll need to improve significantly if we are to get a result against Chelsea next weekend.
Posted by 1979gooner at 14:34

Losing is rubbish, but at least the "unbeaten" burden is lifted from our shoulders. Its scant consolation but there you go.

We have had so many performances like this in recent years, especially against committed, physical sides, where it doesn't quite click for us, passes go astray and style and composure evaporate into frustration.

Its amazing that its taken us until 9 December for it to happen this season.

I don't think it comes down to one individual player, or necessarily the ref (although Howard Webb is notoriously bad). For me, its simply that the team but out against Boro was too inexperienced as a unit to match the challenge they faced. People will point to the absence of Fabregas and RVP, but its also players like Flamini and Hleb who have made the difference this season. And lets not forget how many people were ready to write those two off six months ago.

If the team that played against Boro was all we had, then we would not be top of the table. Its easy to say it 'cos its true.

So I'm just looking forward to getting the first eleven back together - we can afford one or two absences but not four. Plus, if we don't have some better team news between now and Sunday, then a point against Chelsea should be about the limit of our ambitions.

In fact, I think our season started at 4pm yesterday afternoon. We now face a real test and the hard work starts here.