A perfect end to a perfect day 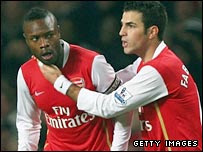 How I enjoyed seeing the full time whistle blown as Ashley Cole lay on the floor writhing in agony as he attempted to get Cesc sent off, poetic justice if ever there was. It was a roller coaster ride of a game, the pace didn't relent for one moment, especially in the second half where it really opened up and became an end to end ripper.

The return of the midfield trio Flamini, Cesc and Hleb made all the difference, Arsenal started very brightly from the off and started nipping the ball around nicely. Chelsea defended solidly and there were very few clear cut chances in the first half. One particular incident stood out when Terry launched into a two footed lunge that fortunately didn't make too much contact with Cesc, a straight red card should have been forthcoming, but Wiley had to be consistently incompetent. Eboue left his studs in on Terry, but there was nowhere near the malice in this challenge, a yellow waz fair. Just towards the end of the half, Cech misjudged a cross and Gallas headed home, one nil at half time.

Chelsea pushed forward more in the second half, but lacked a cutting edge without Drogba in the side. They crafted a few long range efforts which Almunia dealt with comfortably, Wright-Phillips had their best chance by far when he missed from six yards, Almunia seemed to do enough to put him off. Joe Cole cythed down Eboue and was lucky to only see yellow, while Obi Mikel escpaped a booking for a very crude obstruction on Cesc. Alan Wiley doesn't seem to understand that deliberately blocking someone off is a foul when you are out of reach of the football.

We were unlucky not to add to our solitary goal, one goal was harsly give offside while another was disallowed for a 'foul' by Adebayor. Fortunately it did not matter in the end, and Cesc finished off the game nicely by chopping down the unpleasant greedy petulant Cole. What a dissappointment for poor Ashley, especially given that Clichy looks so much better than he ever did. The whole team did well today, the defence was solid, and the midfield were outstanding. Rosicky appears to have finally stayed fit enough for long enough to find a bit of form, at last. It's great to have the incisive RVP back up front, we look a different proposition with him back. Overall a thoroughly deserved win and a return to form at just the right time before some rather tricky fixtures. Bring on the nasty Blackburn on Tuesday.
Posted by 1979gooner at 23:27

Worth an additional mention for Almunia, especially in the week when Mad Jens was back.

I thought Almunia was excellent overall - particularly good saves in 2nd half against Mikel and Shevchenko (twice). Also, Kalou's shot which flew past the post looked like it was covered, had it been on target.

Overall, a very composed performance on a big occassion from Manuel and having watched Jens move a little slowly for that Bucharest header, I think Manuel can be assured of his place for the time being.

I agree, I also thought he did very well to put SWP off when he had Chelsea's best chance.

You sometimes make mistakes by coming off your line, but often it reaps rewards, no keeper gets it right all the time.